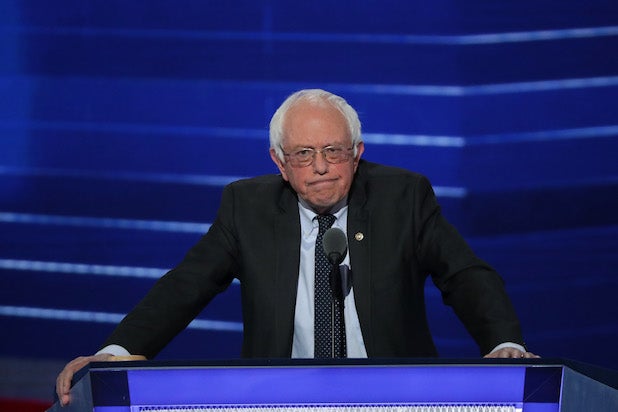 Bernie Sanders left no doubt that he’s supporting Hillary Clinton, regardless of how his supporters feel about it.

“Hillary Clinton must become the next president of the United State,” Sanders said.

Sanders received the loudest ovation of the night as the grand finale of the Democratic Convention in Philadelphia on Monday, amid controversy regarding the event’s treatment of the Vermont senator.

The crowd went wild, chanting “Bernie, Bernie,” inside the Well Fargo Center when Sanders took the stage, with the ovations lasting two minutes before he could even speak a word.

“They stole it from ya, Bernie,” one supporter yelled loudly.

The former presidential candidate started off his speech by thanking everyone who helped his campaign, which he called a “political revolution.” The majority of what followed was a variety of highlights from the campaign trail, mentioning the decline of the middle class, dangers of climate change and facts about the one percent having the majority of the nation’s wealth.

“Election days come and go but the struggle of the people to create a government that represents all of us and not just the one percent … that struggle continues,” Sanders said. “I look forward to being part of that struggles with you.”

Sanders could have pulled a Ted Cruz and used his speaking opportunity to make the story about himself, but instead he endorsed Clinton and took the high road, saying she will nominate the right people for the Supreme Court and defend women’s right to choose. He continuously mentioned that he will continue fighting for the things that he campaigned for during the Democratic primary.

Sanders admitted that he disagrees with Clinton on a number of issues but explained, “that is what democracy is all about.” He said that by coming together, they have produced the most progressive platform in the party’s history.

“I look forward to your votes during the roll call tomorrow night,” Sanders said at one point. “I hope you take enormous pride in the historical accomplishments that we have achieved … the revolution continues.”

The DNC issued a formal apology to Sanders earlier on Monday for leaked emails that suggested the party’s leadership conspired against him during the primaries in favor of presumptive nominee Clinton.

“I understand that many people here in this convention hall and around the country are disappointed about the results of the nominating process … I think it’s fair to say that nobody is more disappointed than I am,” Sanders said.

However, when it comes to now getting Clinton into the White House, “I am going to do all that I can to make that happen,” he said. “I am proud to stand with her tonight.”

Earlier in the day, Debbie Wasserman Schultz stepped down form her job as chair of the DNC because of the leaked email scandal.

“On behalf of everyone at the DNC, we want to offer a deep and sincere apology to Senator Sanders, his supporters, and the entire Democratic Party for the inexcusable remarks made over email,” the DNC said in a statement. “These comments do not reflect the values of the DNC or our steadfast commitment to neutrality during the nominating process.”

See video below of Sanders amid his loud supporters.