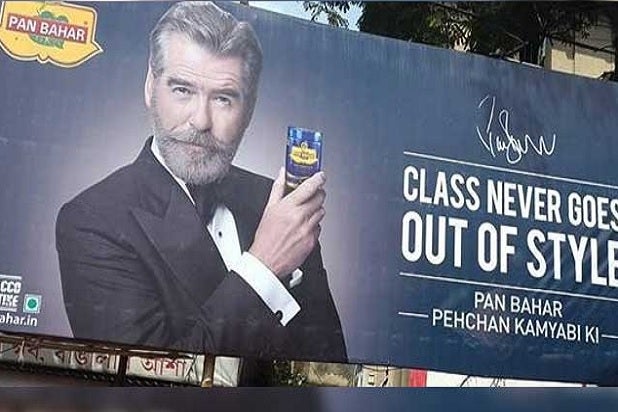 Pierce Brosnan gave the people of India quite a surprise on Friday morning when he appeared in a full-page ad for the pan masala brand Pan Bahar.

The actor, best known for playing super-suave secret agent James Bond in four films, is not the first celebrity to appear in a foreign advertisement. If you don’t believe that, just watch this Nicolas Cage commercial from Japan.

But people online are definitely having fun at Brosnan’s expense, with plenty of “shaken, not stirred” jokes to go around.

I still have no idea what Pan Bahar is but I want it. @PierceBrosnan

First of all….WHY did it had to be #PierceBrosnan?
Second! Does the poor man aware what’s he promoting? #PanBahar pic.twitter.com/zpeo0ESGK4

Pierce Brosnan did the Indian version of Suntory ad with Pan Bahar pic.twitter.com/P71vjvjBd1

Remember when celebs would do ads in other countries they’d never do in the US? I think Pierce Brosnan forgot the internet changed that. https://t.co/lPBwthmncq

Pierce Brosnan was 007. Now he is Supariman!

Everyone knows Pan Bahar but who is this Pierce Brosnan??

If #PierceBrosnan were to come back as #JamesBond, the title of the movie would be: The Spy Who ‘Pan’ned Me! https://t.co/S7q7OUEsXT

Does Pierce Brosnan endorsing Pan Bahar mean a lot of people are going to go to pan shops and say, “one Pan Bahar, shaken, not stirred”?