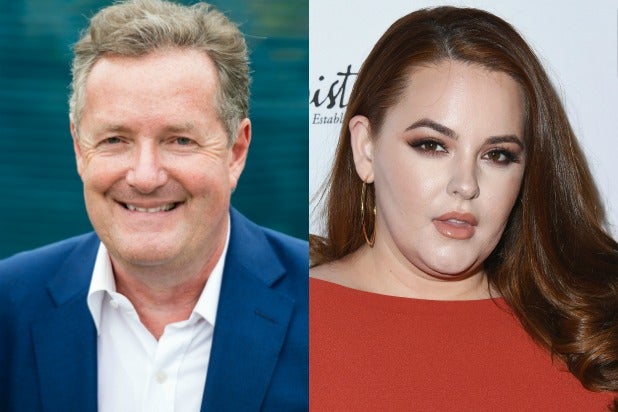 Piers Morgan took Tess Holliday to task on Thursday, saying that the plus size model could not possibly be happy with her appearance, adding that any claim from her to the contrary was only evidence of denial.

“Nobody, male or female, could see their weight surge to over 300lbs if they’re just 5ft 3in tall, and be genuinely happy,” wrote Morgan in his latest column for the Daily Mail. “Right now, I think you’re trapped in a hellish spiral of self-delusion in which your soaring fame and fortune is entirely dependent on you remaining morbidly obese.”

*NEW: My open letter to @Tess_Holliday about why she is so wrong to celebrate her morbid obesity: https://t.co/9lUVcjhzur via @MailOnline

“Morbid obesity, as its name suggests, is a very serious health condition. Those who are diagnosed with it are at greater risk for illnesses including diabetes, high blood pressure, gallstones, osteoarthritis, heart disease and cancer,” Morgan continued. “Yet Cosmopolitan sat you in a throne and declared you’re ‘a role model for others.”

In the Cosmopolitan UK piece, Holliday was lauded as “everything the fashion industry needs” and plugged her #effyourbeautystandards hashtag campaign on Instagram.

“I’m at the heaviest I’ve ever been in my life now and it took me being the heaviest to finally love myself,” she told the magazine.

Complications from obesity and being overweight kills 2.8 million people per year, according to the European Association for the Study of Obesity.

It’s not the first time Morgan has taken Holliday and Cosmopolitan to task over the issue. In late August, when news of the cover first emerged, Morgan unleashed his displeasure on Instagram.

“As Britain battles an ever-worsening obesity crisis, this is the new cover of Cosmo. Apparently we’re supposed to view it as a ‘huge step forward for body positivity,” he scoffed. “What a load of old baloney. This cover is just as dangerous & misguided as celebrating size zero models.”

As Britain battles an ever-worsening obesity crisis, this is the new cover of Cosmo. Apparently we’re supposed to view it as a ‘huge step forward for body positivity.’ What a load of old baloney. This cover is just as dangerous & misguided as celebrating size zero models.

Reps for Holliday did not immediately respond to request for comment from TheWrap.