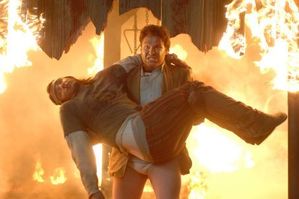 I’ve only now recovered from the midnight screening of "Pineapple Express" on Wednesday. The hall was packed with teenagers, and the smell of weed wafted through the theater. I kept my expectations low. Years in Hollywood has taught me not to believe the trailers. And far too often I have showed up to comedies by the Apatow mainline network and farm team only to be offended ("Knocked Up"), or bored ("Walk Hard"). This, however, is the real deal — smart writing, strong characters, a well-considered plot packed with action, led by a director (David Gordon Green) who knows what he’s doing. The movie has plenty of goofy gags, but it pulls its humor from juxtaposing the casual, emo, sensitive American geek-male vibe against the familiar, brutal violence of the drug trade as depicted by Hollywood for decades. (My personal favorite: the drug dealer Red, played by a genius Danny McBride, debating the Buddhist cycle of reincarnation with Dale Denton, played by Rogen, as Red bleeds to death on his bathroom floor.) It’s funny even if you’re not high.  I smell a cult hit that will follow Rogen, McBride and James Franco their whole careers. (The one-day box office from Wednesday bodes well: $12.5 million.)