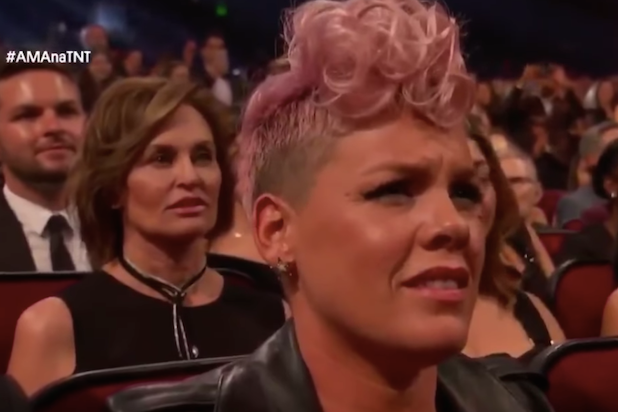 Shockingly, Twitter detectives have once again missed the mark.

Christina Aguilera’s tribute to Whitney Houston at the American Music Awards — yes, those are still a thing — brought the house down on Sunday night, but many on the social platform were wondering why Pink looked so not-impressed during the performance.

The cameras panned to the “Get the Party Started” singer a few minutes into XTina’s cover of “I Will Always Love You,” looking like she’d just taken a giant swig of sour milk.

Considering that Pink and Aguilera had a decades-long “beef” dating back to their “Lady Marmalade” days (a staple of early 2000s middle school dances, by the way), Twitter started to run with it. Here’s one example… you get the idea.

So did anyone see @Pink look at Christina, like… #AMAs pic.twitter.com/1mpX3JTDgH

But after one user said they’d “deaded” their beef last year, Pink weighed in to confirm, saying, “Christina f—ing killed it.”

She added she was “in awe of Christina’s talent” and that “negative Nancy’s [sic]” needed to pay attention to later in the clip when she was in tears.

Yes. THIS. Christina fucking killed it tonight for one of our favorite singers ever. This about Whitney, and I am in awe of Christina's talent. Show the clip where I'm in tears, you negative Nancy's ????????✌????❤️ https://t.co/5Lroq73xrQ

I’m no private eye, but it was kind of easy to see Pink wasn’t hating on Aguilera’s performance when she was SINGING ALONG the next time the camera panned to her. Just another reminder Twitter can often kill brain cells faster than any weekend bender.