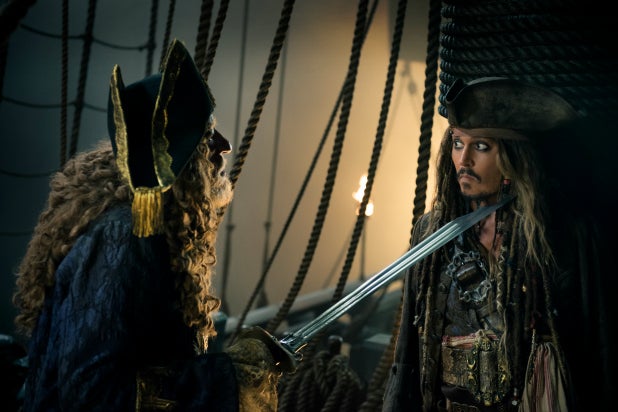 “Pirates of the Caribbean: Dead Men Tell No Tales” set sail with an impressive $5.5 million at the Thursday previews.

“On Stranger Tides” didn’t open on Memorial Day Weekend six years ago but instead debuted one week before. “At World’s End” was released on MDW in 2007.

The fifth film in the franchise is set to earn a four-day total of $82 million to $85 million, according to independent trackers, with Disney estimating $80 million against a reported budget of $230 million.

“Pirates of the Caribbean: Dead Men Tell No Tales” sees Johnny Depp reunite with original cast members Orlando Bloom and Geoffrey Rush, along with newcomers Kaya Scodelario and Brendon Thwaites, as Jack Sparrow sets out on a quest to find the Trident of Poseidon while being hunted by Captain Salazar (Javier Bardem) and his crew of pirate killers. The film is written by Jeff Nathanson and directed by Joachim Rønning and Espen Sandberg (“Kon-Tiki”), with Jerry Bruckheimer producing.

Internationally, the film is off to a great start as well. It has earned $34.5 million through Thursday, and its opening day ranks among the top debuts of the year in several markets including Germany, Austria, France, Finland, Sweden and Belgium. It was the biggest opening day ever in the Ukraine.

These numbers came out before scathing reviews of Seth Gordon‘s remake hit the internet, with the film receiving a 19 percent RT score. It received a CinemaScore of B+.

“Baywatch,” based on the cult TV series from the 90s, cost somewhere in the high $60 million range and won’t debut overseas until June 2.