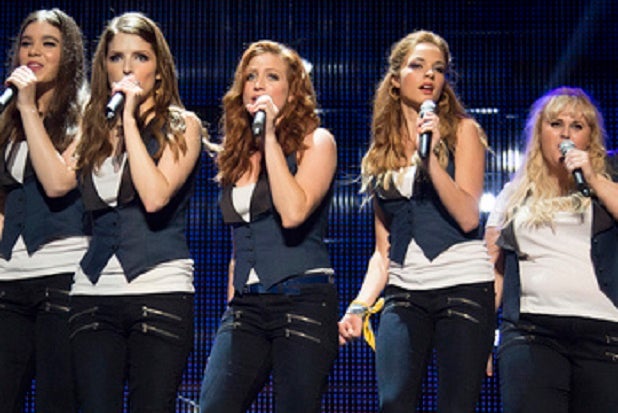 Both were impressive in the opening round of one of summer’s most intriguing box office battles, in which two of the season’s most anticipated films are expected to bring in around $40 million and try to take the top spot from “Avengers: Age of Ultron.” Disney’s Marvel superhero sequel has won the last two weekends, and on Friday became the year’s second film to hit $1 billion in global grosses, following “Fast and Furious 7.”

The Barden Belles, the all-female a cappella group at the heart of “Pitch Perfect 2,” belted out their big opening number on 2,652 screens beginning at 7 p.m. By Friday, Universal will have the PG-13-rated musical comedy, which marks the directing debut of Elizabeth Banks and was written by Kay Cannon, in 3,473 theaters.

The smashing first night for “Pitch Perfect 2” shows how far it’s come. The original film cost just $17 million to make and began its limited release in a 335 theaters back in 2012. Many were in college towns, as Universal slowly built buzz with strong word of mouth and social media. “Pitch Perfect” ultimately took in $115 million at the worldwide box office, $65 million domestically, and became a DVD hit.

The sequel cost a little more at $29 million, and has amped it up with Hailee Steinfeld and Katey Sagal joining the ensemble cast, which returns Skylar Astin, Brittany Show, Anna Camp and Adam DeVine from the original. The reviews have been good (69 percent positive on Rotten Tomatoes) and its fans are expected to bring the biggest shot of girl power seen at the box office since “Fifty Shades of Grey” and “Frozen.”

“Mad Max,” the apocalyptic road rage epic written and directed by George Miller, roars back to the big screen 30 years after the Aussie filmmaker spawned a cult classic with a lot of help from Mel Gibson and Tina Turner’s hit song “We Don’t Need Another Hero.”

The R-rated update is big hit with critics, earning a 99 percent positive rating on Rotten Tomatoes after 177 reviews, and now it’s off to a very strong start. Thursday’s haul tops the $3.6 million taken in by recent sci-fi films “Pacific Rim,” “World War Z” and “Prometheus,” the latter two of which posted $66 million and $51 million in their first weekends, respectively.

“Mad Max” will be driven by a hot star in Hardy, a kick-ass Charlize Theron and Miller’s unique brand of motor mayhem, ratcheted up by three decades of advances in pyrotechnic effects and 3D, and should be a major draw for mainly male action fans.

“Mad Max: Fury Road” was financed by Warner Bros. and Village Roadshow and has a $150 million budget. It will be in 3,702 North American theaters by Friday, and the battle of the sexes will rage at overseas multiplexes, too.

Warner Bros. is rolling out “Mad Max” on 16,000 screens in 68 foreign countries this weekend as well. That’s every major market except Japan and China, where it’s still awaiting a date. “Pitch Perfect 2” will debut day-and-date in 27 foreign territories including the U.K., Germany, Russia and the Philippines.