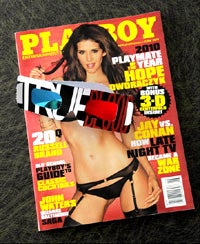 Playboy is about to publish an issue with a 3D centerfold.

The magazine’s June issue — hitting newsstands Friday — comes with a pair of 3D glasses (sponsored by HBO’s “True Blood”) necessary to view Hope Dworaczyk, its 2010 Playmate of the Year.

Hugh Hefner says the idea for a 3D centerfold was inspired directly by movies like "Avatar" and "How to Train Your Dragon," though Hef himself is "not a huge enthusiast of 3D.”

This is a first for Hefner’s laddie magazine. But it’s worth noting Playboy isn’t breaking new ground here. Sports Illustrated, for example, put a pair of 3D glasses in its swimsuit issue for surreal bikini model viewing. Even Glamour has done the 3D thing.

But Playboy is looking to generate some buzz for a magazine that’s been struggling to maintain a healthy circulation.

Here are some numbers that’ll give you a headache, with or without 3D glasses. According to the Audit Bureau of Circulations, Playboy ended the year with a paid circulation of just over 2 million, off more than 20 percent from its 2.6 million rate base guarantee to advertisers. Playboy’s newsstand sales, meanwhile, have been cut in half over the past five years.