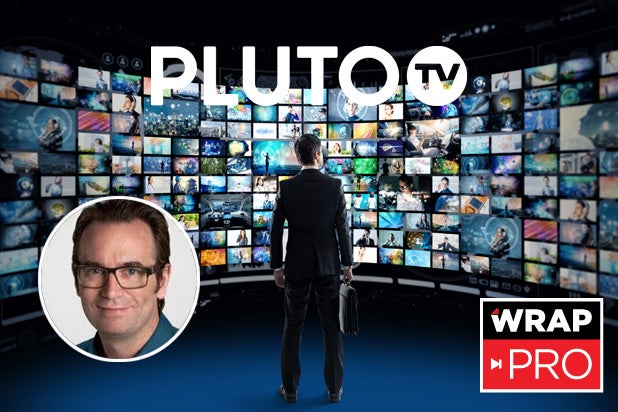 The demise of traditional, ad-supported TV has been greatly exaggerated, according to Tom Ryan. The CEO of Pluto TV has tried to take the best of what old-school television has to offer — accessibility, quality programming, curation — and use it to power his Los Angeles-based streaming startup that Viacom acquired for $340 million in a deal that closed on Monday.

At a time when Netflix is reinventing the way viewers watch and pay for content, Pluto TV has doubled down on the sanctity of free, ad-driven entertainment — though Ryan said Pluto TV could consider a paid “premium” option down the line. Ryan, who will remain as Pluto TV’s CEO, also teased that a “significant” portion of Viacom content will migrate to Pluto TV.

Though he declined to detail the exact number or any specific titles that might stream on Pluto, Viacom has held back hit shows like MTV’s “Jersey Shore” and Comedy Central’s “The Daily Show” from streaming services like Hulu and YouTube TV.

Viacom chief Bob Bakish, who has spearheaded the company’s digital push since taking the reins two years ago, said last week that Pluto TV will serve as the “cornerstone” of its direct-to-consumer strategy by giving Viacom a free platform to upsell viewers on content from Noggin, Comedy Central and “a new Nickelodeon product.”

Since launching in 2014, Pluto TV has added more than 100 free channels covering movies, TV and news. After doubling its user base last year, the company now boasts more than 12 million monthly viewers who are streaming on mobile, smart TVs and a myriad of devices, including Roku and Apple TV.

TheWrap caught up with Ryan one day after the Viacom deal closed to discuss his new overlords and how much time viewers are spending watching free TV.

You launched Pluto TV as an ad-based video on demand [AVOD] service, just as Netflix was ramping up the SVOD revolution. Why did you pursue that strategy?

AVOD has been overlooked and under-appreciated for a very long period of time. We made a bunch of contrarian — or seemingly contrarian — bets whens we launched the business, about the power of linear. At the time we launched Pluto TV, everyone said the world was moving to subscription video on demand, that people won’t watch ads, people want to DJ their way through video experiences and play everything from start to finish on demand. We knew people are creatures of habit and people like to be programmed to.

What lessons from “traditional TV” has Pluto TV brought to the streaming world?

Traditional TV has done so many things right over the years. It’s given you a great place to go for a wide range of premium content, aggregated into interspace channels and delivered in an easy-to-channel-surf guide. Those are fantastic things that served traditional TV over the years.

But I think, as with any new thing, once there’s a view the world has changed and you see some of the major SVOD players emerge, there becomes a conventional group think that that’s the only way to compete.

Consumers want to have a lot of the things traditional TV has done well over the decades, but they want it on an internet-connected product. They want to watch it over the internet or on their phone.

If we look back over the course of television history, a significant portion of the great content that we’ve known and love has been funded by advertising, so why would that change in the future? A significant portion of television will continue to be funded by advertising, even though we’re in this golden age of television in part because the major SVOD services are investing so heavily [in ad-free content]. That’s great for consumers, but consumers are only going to subscribe to so many subscription services.

A look at Pluto TV

So that’s Netflix, Amazon Prime Video and everyone else fighting for that 0.8, right? So what Pluto allows is we gives you an easy, free and highly-curated way to create your bundle.

Pluto TV has experienced you’ve called “explosive” growth, doubling monthly viewership to 12 million users by the end of last year. How much time is the average user spending per session on Pluto TV, on both TV and mobile?

But clearly the session duration on connected TV, which is true lean-back living room viewing, is much longer, which has been so gratifying. We’re looking to be the predominant free-streaming TV app that you engage with in your living room on your connected TV, whether that’s a smart TV, connected video player or a gaming console.

Why was Viacom the right partner for Pluto TV?

They help us accelerate our growth even faster. Our mission has been to entertain the planet, and we want to be a free streaming platform that is entertaining people around the world with the best-in-class free television service.

I come back to the main categories of value that were really driving the decision to do this deal in the first place. They have a massive amount of premium content that they’ve held back from SVOD services that can come to Pluto TV — and that can make our offering that much more premium that much more quickly.

We believe that partnering with a world-class media company like Viacom brings premium content to Pluto, brings a marquee brand to Pluto. [Viacom is a company] that can help us advance our advertising capabilities — I believe they sell $4 billion worth of ads each year — and also has a global footprint. These are all major accelerants to what we’ve already built.

Is “Pluto TV Premium,” or a paid subscription version of Pluto TV, a possibility?

We’ve always had a vision at Pluto as a standalone company of building a freemium offering over time. And Viacom has also announced since the deal there’s an opportunity for Pluto to serve as that free, highly-engaged OTT audience that can be presented with products like Viacom’s subscription services. So there’s already a shared vision there. How that will manifest itself is not yet fully determined or announced.

But absolutely, when you have a group of highly engaged free users and they’re making your service one of their go-to destinations services for their TV viewing, it absolutely makes sense to look at providing them with additional services and paid services.

What digital trends are you keeping an eye on in 2019?

I do believe you’re going to see an explosive growth in the viewership that comes from connected TVs. Not just from app stores but from an increasingly sophisticated set of services. Because hardware companies want to be in the content and services businesses. Hardware is a low-margin business but they build up very valuable audiences and they want to further monetize what they’ve built by being higher-margin content and advertising based revenue. and I think companies like ours are really well positioned to assist companies get into that.

So I think there’s going to be a lot more that rolls out in terms of built-in television experiences that provide a free and instant out-of-the-box entertainment experience for customers of smart TVs and other products. It’s not an unknown trend, but I think it’s a trend that’s really poised for rapid growth.

Trump Hints at 2024 Run During CPAC Speech: ‘I May Even Decide to Beat Them for a 3rd Time’