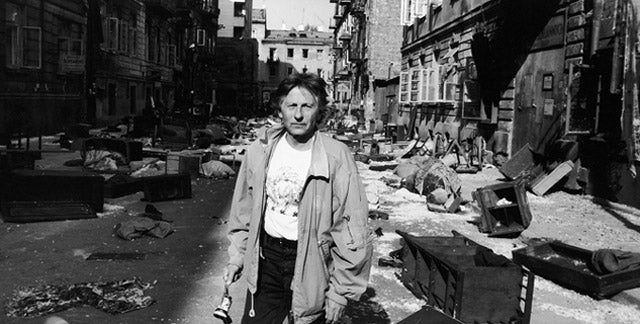 When Roman Polanski agreed to collaborate with James Greenberg, the author knew he had a problem: How should he address the “Chinatown” and “Pianist” director’s messy personal life in the career retrospective?

Polanski gave his blessing to the project on the grounds it wouldn’t focus on notorious episodes in his past, yet they are inextricably wrapped up on his identity. Greenberg felt he couldn’t ignore wife Sharon Tate’s grisly murder and Polanski’s subsequent sex charges with an underage girl completely.

“It was something I had to figure out how to do, because everyone knows about it and it would be a glaring omission if I did not mention it,” Greenberg told TheWrap. “So I dispense with it in the first chapter.”

Indeed, Greenberg quickly cuts to the chase in the coffee-table sized “Roman Polanski: A Retrospective.” In a single page he outlines the director’s remarkable escape from Nazis in wartime Poland, death of pregnant wife by Manson followers in 1969 and sexual assault charges of a 13-year-old girl in 1977, followed by Paris exile. Also included in the swift overview: Polanski’s 2009 arrest in Switzerland at the urging of U.S. authorities.

After that, Greenberg, a long-time entertainment journalist who edits the DGA Quarterly, addresses the notorious events only when they have a direct bearing on Polanski’s work – or critical reception to it.

Greenberg opens the chapter about “Macbeth,” for example, by rebutting the notion that it was intended as a commentary on Tate’s bloody murder, then moves on to Polanski’s creative choices mounting the production. He revisits Tate’s murder in the chapter on “Tess.” The 1979 adaption of Thomas Hardy’s novel starring Natassja Kinski was the first film Polanski made after he escaped from the U.S. following sexual assault charges. Critics suggested that Polanski was attracted to the story about a young woman seduced by an older man due to his recent experiences.

But Greenberg argues that Polanski was drawn to the story more for Tate’s cruel demise than the assault case.

“Although the parallels to his own life are undeniable, critics who interpreted his attraction to a story about a young woman seduced (or raped) by an older man as either insensitive to or a comment on his own situation were, I think, missing the point,” Greenberg writes. “For Polanski, who is not given to introspection, ‘Tess’ probably had more to do with the malevolent fate that had befallen Tate, and the film is dedicated ‘to Sharon.'”

For the most part, however, the book dwells on Polanski’s craft and the movies he’s made. There are chapters on every release from “Knife in the Water” (1962) to “The Ghost Writer” (2010) and “Carnage” (2011), plus breakout chapters on his writing, directing and acting. Published by Abrams Books, it is richly illustrated with photos from Polanski’s personal archives. Greenberg traveled to Paris to view those archives and conduct further interviews with the director.

“Once he was on board, he was very cooperative and generous with his time,” said Greenberg, who was startled to discover film strips of Polanski directing Tate in “The Fearless Vampire Killers” a year before they married.

“It’s always so loaded to see him directing her,” Greenberg said. “It was breathtaking.”

Polanski was frank in his assessment of his work, telling Greenberg that “Repulsion” was “a shabby piece of work,” but effective. The director, who celebrated his 80th birthday earlier this month, considers the Holocaust film “The Pianist” his best — and most personal — film.

“Why do I go on doing it? Simply because I enjoy it, and because I’m still learning about directing,” Polanski writes in a forward. “My only regret is that I didn’t make more films.”

The director debuted his latest film, “Venus in Fur” at Cannes. Next up: “D,” his movie about the Dreyfus affair, a French political scandal involving a Jewish soldier in the late 1800s.

Anyone hungry for more details about Polanski’s sordid encounter with Samantha Geimer decades ago may get satisfaction next month, when she releases her own book. Those more interested in the work can immerse themselves in this rich overview of Polanski productions.

Greenberg will sign copies of “Roman Polanski: A Retrospective” 3 p.m. Sept. 8 at Diesel Books in Brentwood.