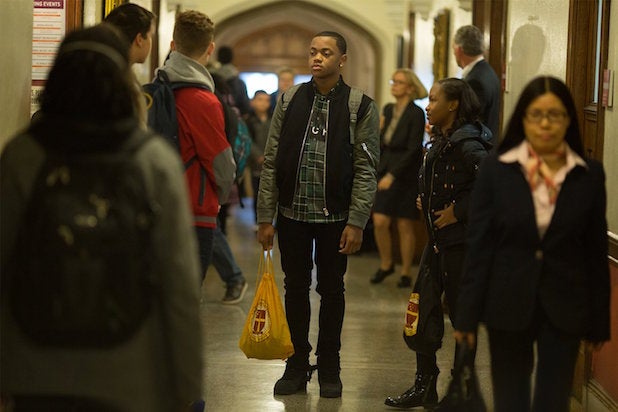 Tariq St. Patrick (Michael Rainey Jr.) just went through hell and back and still hasn’t learned his damn lesson because, for some odd reason, the kid is still lying to his dad and uncle Tommy (Joseph Sikora).

We were cringing at the fact that Tariq was all buddied up with Kanan Starks (50 Cent) since the start of the season, but we figured “hey, the kid doesn’t know any better.” Kanan was pretending to be a guy named Slim and was spreading lies about James “Ghost” St. Patrick (Omari Hardwick) that caused Tariq to distrust his father. As time went on, though, we realized that mini-St. Patrick wasn’t guilty of just not knowing any better, the kid was just annoying, rude, naive and plain inattentive (there were so many warning signs!!!).

He was cursing at his sister, setting up his friends to steal from them, coming him late, lying to Tommy (who was trying to protect him this whole time) and his mom.

So when Tariq was kidnapped by Jukebox (Anika Noni Rose), Kanan’s/Slim’s friend and his dad had to come rescue him all while exposing who “Slim” really was, we figured that maybe, just maybe, he would see the light; now, he would understand how much he really doesn’t know and feel guilty and stupid for getting caught up in such a bad situation. But nope.

Seven episodes into the season and mini-St. Patrick still hasn’t learned his lesson.

When Ghost and Tariq finally meet up with Tommy, the latter runs up to his uncle and embraces him in an “I’m so glad to be alive and I missed you” hug, which is why we were confused af by what transpired next.

After Tommy and Ghost catch up on a few things, Tommy asks Tariq if Dre (Rotimi Akinosho) knew that he was with Kanan or if he really was telling the truth about not knowing where Tariq was. And, at this pivotal moment, Tariq chose to lie and cover for Dre. WHY?!

The kid literally almost had a bullet through his head all because of Kanan and now he chooses to cover up for another shady member of Kanan’s crew?!

So, yeah — at this point we’re fed up with mini-St. Patrick.