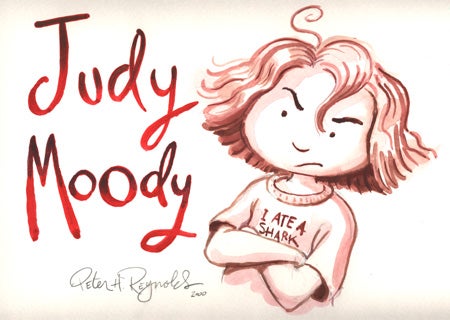 Parents of 12 year-old aspiring actresses, start getting those headshots ready.

"Precious" producers Gary Magness and Sarah Siegel-Magness are bringing "Judy Moody and the Not Bummer Summer" to the bigscreen, reports Variety.

John Schultz ("Aliens in the Attic") will direct the family film from an adapted screenplay by "Judy Moody" author Megan McDonald and Kathy Waugh. The Magnesses will produce through their production company Smokewood Entertainment.

Chronicling the humorous adventures of third-grader Judy Moody, the eight-book series has been translated into 23 languages and sold more than 12 million copies in print. The books even inspired a spin-off series featuring Judy’s brother Stink, who will appear in the movie to help the girl-centric property attract young boys.

There are several young actresses who are the right age for the lead role, but I also wouldn’t be surprised if the producers opted to launch a public casting call and go with an unknown, especially if they’re planning to launch a franchise with this movie.

The Magnesses optioned the film rights to the "Judy Moody" series after their daughter read one of the books. If I could’ve snapped my fingers and had my favorite childhood books turned into movies, there’d be a trilogy based on R.L. Stine’s "The Babysitter" series. Clearly I was reading the wrong kinds of books as a kid.

Bobbi Sue Luther and Andrew Sugarman will exec produce the feature adaptation. CAA is packaging the project and will handle the sale of North American rights to the film, which begins production this August in Los Angeles.