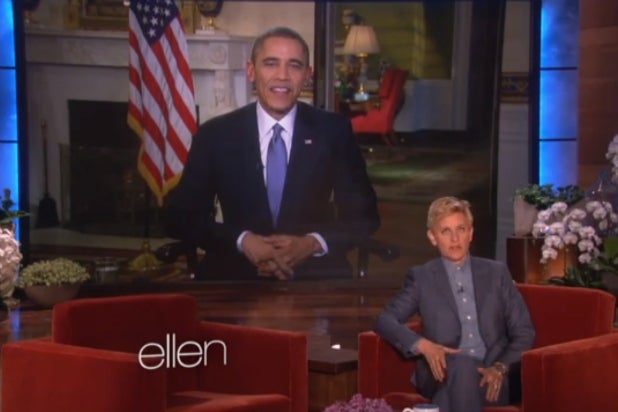 The 44th President of the United States joined Ellen DeGeneres via satellite to plug Obamacare, talk “House of Cards” and “Scandal,” and to settle that whole Twitter retweet record business once and for all.

After checking in on “Michelle’s husband,” whose family is out of town this week, Ellen apologized to the President for breaking his Twitter retweet record with the most famous Oscars selfie ever taken.

“I heard about that,” Obama replied. “I thought it was a pretty cheap stunt myself … getting a bunch of celebrities in the background, you feeding them pizza.”

See video: President Obama and Zach Galifianakis Grill Each Other On ‘Between Two Ferns’

The Commander-in-Chief delivered plenty of other funny lines in his guest appearance, to the delight of the “Ellen” studio audience.

On his pact to get the same tattoo in the same place and take a family portrait should his daughters ever ink their skin, Obama said: “We will reduce the cool factor of any tattoo. I suspect that will be a pretty good deterrent.”

“I hate to say it, but I hope they tattoos,” Ellen quipped.

On “Scandal” and “House of Cards,” Obama commented: “I have to tell you, life in Washington is a little more boring than displayed on the screen. If you followed me, most of my day is sitting in a room, listening to a bunch of folks in gray suits, talking about a whole bunch of stuff that wouldn’t make very good television.”

Ellen retorted, “That’s what I do and we make great television.”

But Obama countered with: “I have to tell you, Ellen, there is not much dancing in The Situation Room as a general rule.”