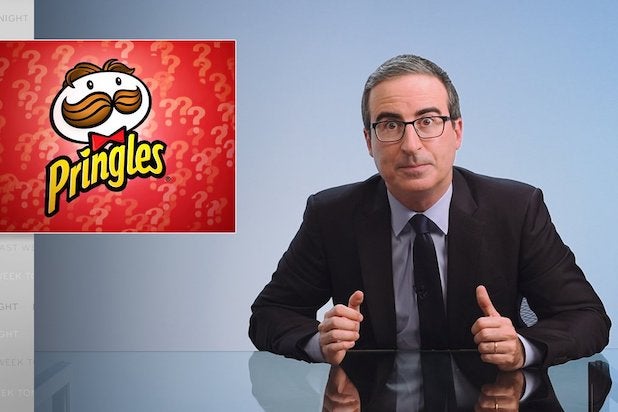 Pringles has met the challenge issued by John Oliver and “Last Week Tonight” by revealing the full body of its Mr. P mascot, and the internet is… unimpressed.

The 14-second long “Mr. P reveal” that Pringles shared on Tuesday opens with the floating head mascot welcoming a camera into his home. Standing beside a Christmas tree, he then strikes a pose to reveal oversized sneakers, pants and a red jacket with a white tee underneath that also reads “Pringles.”

The moment @IamJohnOliver and @LastWeekTonight have been waiting for. In honor of every second John has thought of Mr. P's body, we are donating $1 to @feedingamerica, which happens to be $10K. pic.twitter.com/Ori2jKJ8fz

“Booooooooo it’s just a normal human man,” one Twitter user wrote about the underwhelming reveal. Another user lamented that Julius Pringle “wasn’t in a tube top.”

Yes, Mr. Pringles is apparently a human person underneath his big head, and not an octopus, “Big Hero 6” robot or swimsuit model, as “Last Week Tonight” predicted Monday after the show shared an array of bizarre fan art it received in response to a segment.

Pringles, now a division of Kellogg’s, did, however, agree to match the HBO show’s donation of $10,000 to the food bank Feeding America, which Oliver had promised to do if the brand agreed to reveal the character’s full body.

“In honor of every second John has thought of Mr. P’s body, we are donating $1 to @feedingamerica, which happens to be $10K,” the brand tweeted Tuesday.

A few weeks back, Oliver made a joke about knowing when we could expect final election results by saying it’s as likely as finding out when Michael Keaton will win his Oscar, or when we’ll know what the Pringles mascot’s nipples look like. But in a web exclusive clip, Oliver revealed he has so many more questions.

Also Read: John Oliver Will Get His Danbury Sewage Plant After All - and a Porta-Potty (Video)

“I know so much useless information about Pringles, but not the one thing that I really want to know, which is, what is Julius Pringles working with from the neck down? Do I need to know this? No, I don’t. Do I want to? Yes, I do,” Oliver said. “So much so, that I’m willing to donate $10,000 to Feeding America if Pringles answers my question, on the condition of course that they don’t spend a f—ing cent on Pringles, because it’s a garbage snack. It’s garbage.”

Will this reveal finally satisfy Oliver? We’ll see. Earlier this season, the host trolled the city of Danbury, Conn. into naming a sewage plant after him, so the bar is pretty high.

See some of the best online reactions below, and see John Oliver’s Pringles segment here.

sure looks like Cincy based agency came up with this. Congrats on matching the $10K pic.twitter.com/HBvW1W4RtD

Really disappointed he wasn't in a tube top.

My life is now complete. Thx 4 turning this into an awesome thing that will help ppl.

That was disappointing… I wanted the crab…

I like the shoes, but I was hoping he’d be ripped.

Mr. P freaks me out man