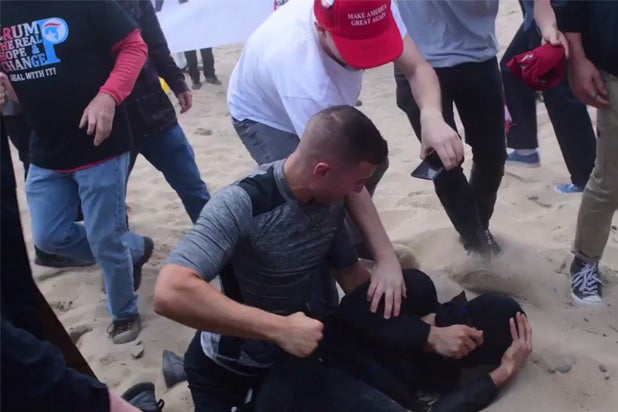 A rally in support of President Donald Trump in the Los Angeles suburb of Huntington Beach turned violent Saturday, as fans of the president fought with protesters after one allegedly attacked one of the event’s female organizers with pepper spray.

The Los Angeles Times reported that a group of Trump supporters waving flags tackled and started punching and kicking a masked protester after organizer Jennifer Sterling was pepper sprayed. A Times reporter on the scene provided video of the brawl, which was one of several that broke out among demonstrators at the Make America Great Again rally.

Capt. Kevin Pearsall of the California State Parks Police told the Times that four people were arrested, all counter-protesters.

Sunday’s demonstration, held at Bolsa Chica State Beach, was one of about 40 affiliated events nationwide, all using the hashtag #MAGARALLY on social media. There was another event in the heart of Hollywood, and other rallies in places including Seaside Heights, New Jersey, Clearwater, Florida and Wichita, Kansas.

The rallies came after a series of massive demonstrations across the country during the first three months of the Trump presidency, as millions of Americans gathered in downtowns and airports to protest the administration’s treatment of women’s reproductive rights and the since-voided travel ban.

What an amazing turnout at this #MAGAMarch in Hollywood! So high energy! Over 300 people marched! #MAGAMeetUps #NowThatCantBeReal but it is! pic.twitter.com/GN7hQWSeQL