Britain’s longest-serving monarch is “experiencing mild cold like symptoms but expects to continue light duties” at Windsor Castle over the coming week, the palace said in a statement.

The 95-year-old queen, who has received three doses of the coronavirus vaccine, “will continue to receive medical attention and will follow all the appropriate guidelines,” the palace statement continued.

U.K. residents who test positive for COVID are required to self-isolate for at least five days, though the British government plans to lift that requirement for England this week. 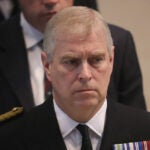 The 95-year-old queen recently met with her son, Prince Charles, and his wife, Camilla, Duchess of Cornwall, who both tested positive for coronavirus earlier this month.

On Feb. 6, the queen celebrated her 70th year on the throne with the anniversary of the 1952 death of her father, King George VI. She has a busy public schedule over the next few months, including planned in-person appearances like a diplomatic reception at Windsor Castle on March 2 and the Commonwealth Service at Westminster Abbey on March 14, according to the Associated Press.

Last October, the queen spent a night in a London hospital for unspecified tests and she subsequently canceled several public appearances in October after doctors ordered her to rest.