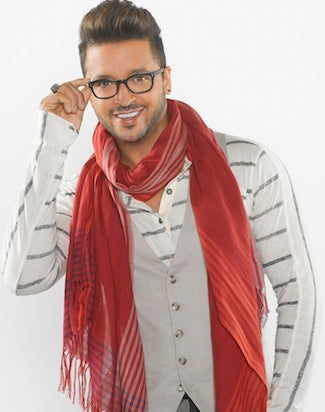 When Bravo’s “Queer Eye” tapped Jai Rodriguez some 10 years ago as its culture expert, the then 23-year-old New York theatre actor winged it.

“I grew up eating off paper plates. I was not the Puerto Rican Emily Post that I was supposed to be,” Rodriguez admitted to TheWrap.

He continued, “Over the course of time – and part of what the audience liked – after the guy got beat up by the other four gentlemen, I’d take him under my gay wing and say, ‘OK, we’re going to do this together.’ It became less about giving him cultural advice and more about making him a well-rounded renaissance man. It became about how to behave in getting the job, getting the girl, getting the life he wants.”

Rodriguez, who recently starred on the short-lived ABC comedy “Malibu Country,” teamed up with the other four guys again for the Bravo special, “Queer Eye Reunion: 10 Years Later” airing Sunday at 9/8c.

TheWrap spoke to Rodriguez about landing the gig and what it was like to reunite with the cast.

TheWrap: It has been 10 years since “Queer Eye” became an instant ratings success. What were you able to take away from that?
Jai Rodriguez: That doesn’t happen in television I’ve learned in the past 10 years of doing numerous series, both scripted and nonscripted. Being part of the first all-gay cast in TV history was certainly remarkable. But, for it to take off as it did and for Middle America to welcome five gay men into their home was kind of groundbreaking.

Certainly, it’s hard now for actors to come out of the closet. But back then, what was that like for you?
I was the only actor. They were real professionals working in their industries. I was literally working in New York, never had any aspirations to do reality work. My sexuality was never really something I was going to discuss. I thought, “Bravo? Who cares? No one will see it” [laughs]. At the time, all they had was “Inside the Actors Studio” and they played reruns of Tom Cruise movies. So, I thought it was one of those things that would fly under the radar. I’d make some extra money, it wasn’t a lot. I thought I’d use it for a vacation or something. I remember thinking, “Really? This is how I’m going to become famous?” It was very bizarre. It took us all by surprise.

How did you end up with the culture category?
They shot two episodes with another person and then let them go. Then, they brought me in, mainly because I was a Broadway star and had a nightclub act at the time. They liked my skill set. They were those of a person who can captivate an audience and had presence. They wanted that imparted on a straight guy, that kind of inner confidence to be able to be cool and hip. That’s really hard to do with a total stranger in a couple days. So, the culture category was the hardest.

What was the toughest part about the culture category?
Certainly as a 23-year-old, it was probably hard for me because I had limited life experience. I’m 34 now and I’d love to do the show over again from this vantage point. It was helpful to have a youthful perspective, the other guys were in their 30s, when we went to a fraternity and dealt with college kids or to have similar sensibilities to the straight guy. I hadn’t had the background in design, fashion or to be really frank, the social graces that my “Queer Eye” persona was supposed to possess. Those were things that I learned on “Queer Eye.”

What was it like to see the guys again?
It was interesting. It was the first time all five of us had been in the same room in seven years, since we shot the final episode of “Queer Eye.” We’ve all seen each other in passing but we’ve never been in the same room, mainly because I was in L.A., Kyan [Douglas] was in Louisiana, and the others saw each other a lot because they all live in New York and run in the same social circles.

It was fascinating. We all went out the night before we shot and it was like no time had passed. It was like back to all the old jokes, all the old timing was there. It was crazy. I’ve worked with so many TV shows and I don’t think I’ve ever had that kind of chemistry with any other casts every in my entire adult career. I took it for granted when we shot the show. I just thought that was innately part of doing television, that you would have that kind of magic, be able to create those kind of comedic moments that people struggle to write. And to think, it was all organic.