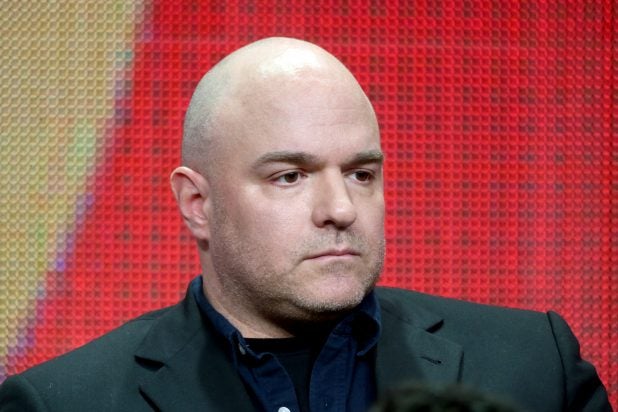 Nick Santora speaks onstage at the "Scorpion" panel during the CBS Network portion of the 2014 Summer Television Critics Association at The Beverly Hilton Hotel on July 17, 2014 in Beverly Hills, California. (Photo by Frederick M. Brown/Getty Images)

“The Fugitive,” a new series from Warner Bros. Television and written by Nick Santora, is currently in development at Quibi, the streamer announced Monday.

Produced by Thunder Road Films with 3 Arts Entertainment and developed with Riverstone Pictures, the short-form series follows Mike Russo, a blue-collar worker who must prove his innocence after being wrongly accused of blowing up a train.

Executive produced by Santora, Basil Iwanyk, Tom Lassally and Albert Torres, “The Fugitive” joins a growing lineup of content at Quibi, including a series based on the rise of Snapchat — a show that Jeffrey Katzenberg compared to its own version of “The Social Network,” and three additional new series announced last month, including a sci-fi drama starring Don Cheadle, a stunt driving show from Idris Elba, and a new beauty series produced by and starring Tyra Banks.

Santora, who is known for creating the CBS TV series “Scorpion,” is also writing and executive producing a Liam Hemsworth-led action thriller for Quibi that was announced last month.

Founded by Katzenberg and Meg Whitman, Quibi closed a $1 billion round of funding in August from investors including as 21st Century Fox, Disney, NBCUniversal, Viacom and WarnerMedia. The service, which will focus on producing and distributing short-form content made for mobile, will launch with a two-tier pricing model: a $4.99 per month ad-supported offer and a $7.99 per month ad-free deal. Whitman says the company has already sold $100 million worth of advertisements ahead of its spring 2020 launch.