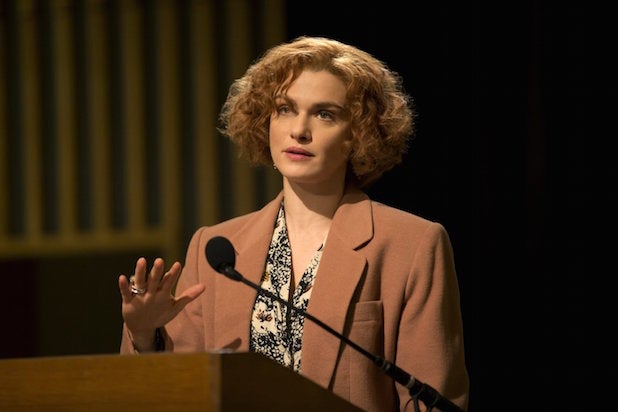 Earning the strongest per theater average of any film out this weekend, Bleecker Street drama “Denial” easily topped the specialty box office.

The film, starring Rachel Weisz as renowned historian Deborah E. Lipstadt — who was forced to prove in court that the Holocaust actually happened — opened to an average $20,420 per theater from five theaters for a total of $102,101.

The true life story was directed by Mick Jackson (“L.A. Story,” “The Bodyguard”) and also stars Tom Wilkinson and Timothy Spall. It has a 72 percent Rotten Tomatoes score.

Directed by Andrea Arnold (2011’s “Wuthering Heights”), the film centers on a teenage girl who gets caught up in a dangerous swirl of hard partying when she joins a traveling magazine sales group. Praised for its naturalistic performances and originality, “American Honey” has a solid 80 percent Rotten Tomatoes score and also stars Sasha Lane, Riley Keough and Will Patton.

“Do Not Resist” from Vanish Films, a documentary that takes a critical look at the current state of policing in the U.S., grossed $7,150 from one theater.

Directed by Craig Atkinson, the doc has a lofty 88 percent Rotten Tomatoes score.

Lauded Swedish drama “A Man Called Ove” from Music Box Films earned an average of $6,778 from nine theaters for a total of $61,000. Based on Fredrik Backman’s international best-selling novel about the quintessential angry old man next door, it has an 86 percent Rotten Tomatoes score.

Chinese language romance film “I Belonged to You” from China Lion earned a total of $325,000 from 50 locations, representing a per theater average of $6,500.

Foreign language drama “M.S. Dhoni: The Untold Story” from FIP grossed $1.2 million from 256 theaters for a per location average of $4,688.

Finally, horse racing documentary “Harry & Snowman” from Film Rise grossed a total of $55,000 from 18 theaters for a per theater average of $3,056. It has an 89 percent Rotten Tomatoes score.