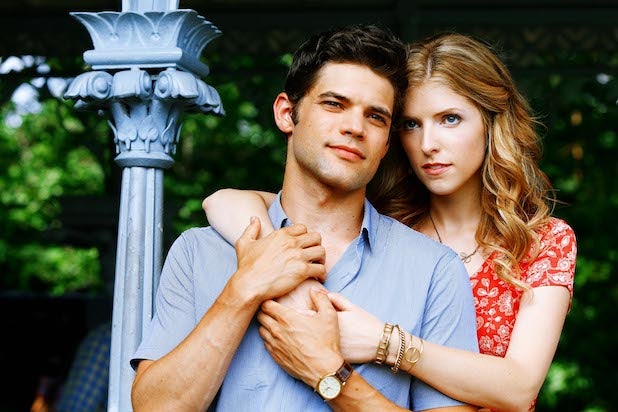 Radius will release the film on Valentine’s Day 2015, which means it will go head-to-head with Universal’s steamy “Fifty Shades of Grey,” as well as Matthew Vaughn‘s “Kingsman: The Secret Service.”

“Last 5 Years,” which premieres Sunday night at the Ryerson Theater, is based on the 2002 off-Broadway musical by Tony Award-winning composer and lyricist Jason Robert Brown.

The musical chronicles a love affair and marriage that takes place over a five-year period. Jamie Wellerstein (Jordan) is a young, talented up-and-coming novelist who falls in love with Cathy Hiatt (Kendrick), a struggling actress. Their story is told almost entirely through song. All of Cathy’s songs begin at the end of their marriage and move backwards in time to the beginning of their love affair, while Jamie’s songs start at the beginning of their affair and move forward to the end of their marriage. They meet in the center when Jamie proposes.

Kendrick and Jordan are no strangers to the musical community, as both have been nominate for Tony Awards.

Kendrick previously received a Tony nomination for “High Society,” and starred in the a cappella musical “Pitch Perfect.” She just wrapped the sequel to that Universal film, and she’ll soon be seen in Disney’s musical “Into the Woods.” Kendrick also had a top-10 song on the U.S. Billboard Hot 100 with “Cups,” which peaked at #6 on the chart.

Jordan starred on the musical TV series “Smash” as well as the hit Broadway musical “Newsies.” He currently stars in the Broadway-bound musical “Finding Neverland,” which is a TWC stage production.

“The Last 5 Years” was produced by Lauren Versel of Lucky Monkey Pictures, Kurt Deutsch of Sh-K-Boom Records and Janet Brenner, as well as LaGravenese.

“For the romantic of heart, ‘The Last 5 Years’ is a love story that delivers across the board. Richard has done an extraordinary job with Jason Robert Brown’s music and lyrics. Anna Kendrick continues to impress – what a voice! — and Jeremy Jordan is bound for stardom. Those familiar with the show will be thrilled with the faithful adaptation and audiences everywhere are in for a real treat,” Radius co-presidents Tom Quinn and Jason Janego said in a joint statement.

“The Last 5 Years’ has been one of the greatest creative experiences I’ve ever had. Working in the independent film world with such extraordinary talent gave me the freedom to make the movie I wanted. And now to have Radius as our distributor is really a lucky break. Radius is at the forefront of re-inventing film distribution for today’s audiences,” said LaGravenese.

“What started as the tiniest spark of an idea fifteen years has now blossomed into this miracle of a movie that gets so deeply and honestly into the souls of the characters I created.  I couldn’t be happier with what Richard, Anna and Jeremy have brought to life, and I couldn’t be happier that it’s found a home at exactly the right company,” added Jason Robert Brown.

“We are very excited to be teaming with Radius, an innovative distribution company with a creative and bold vision for reaching new audiences for Richard Lagravenese‘s stunning and highly original film. We were fortunate to work with Richard, Jason, Anna, Jeremy and the rest of our fantastic creative team to bring Jason’s beloved musical to the screen. We can’t wait to share this gem with audiences,” the film’s producers said in a joint statement.

Quinn and Janego negotiated the deal with CAA. Brian O’Shea’s The Exchange is selling international rights in Toronto. The production is represented by attorneys Iddo Arad and Hayden Goldblatt.