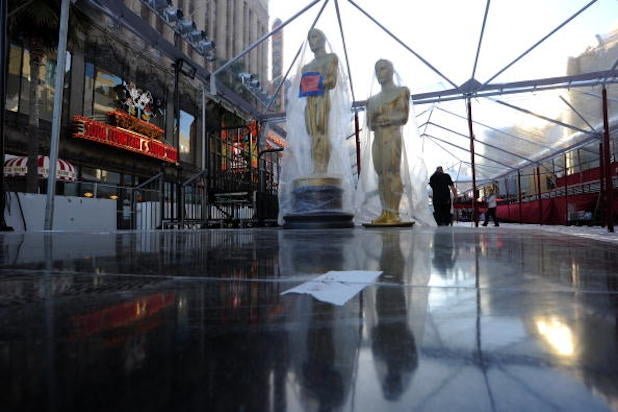 Yep, Los Angeles has much-needed rain in the forecast, meaning the gauntlet of parties, swag-stops and last-minute errands between now and the Academy Awards will be awash in flying water and horrifying traffic.

Weather.com says there’s a 100% chance of rain on Friday, bookended by a 70% chance of rain Thursday and Saturday (when the Indie Spirit Awards go down, making for a chilly and blustery day in the big tent on the beach in Santa Monica).

Also read: Oscar Party Preview 2014: Where Are the Buyers, Bosses, and Big Shots?

But will it soak the Oscars red carpet on Sunday? That’s a lot less likely: As of Wednesday, Weather.com only predicted a 10% chance of rain up at the Hollywood & Highland center, where the ceremony takes place.

As a precaution, the Academy has its big plastic tent covering the red carpet — the same one that kept the stars from ruining their looks when it rained in 2011 and 2010.

In the meantime, time to get the umbrella out of storage, Angelinos — it’s gonna be a wet run-up.