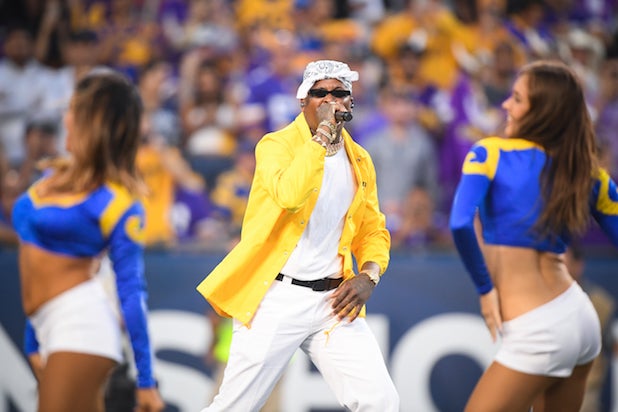 Rapper YG was arrested at his home on robbery charges early Friday morning, two days before his scheduled Grammy performance, according to the Los Angeles County Sheriff’s deputies. Authorities raided his San Fernando home around 4 a.m. on Friday morning after serving him with a search warrant.

The 29-year-old emcee, born Keenon Jackson, was taken into custody and booked on robbery charges. YG’s arrest comes two days before he’s scheduled to perform as part of a Grammys tribute to slain rapper Nipsey Hussle.

The sheriff’s department did not comment further on the criminal accusations.

On July 3, 2019, YG’s Cadillac Escalade was involved in a deadly shooting and pursuit with L.A. County Sheriff’s deputies that tore through Compton to Inglewood. A 65-year-old man was struck and killed by the crossfire on a Compton street during a gunfight. It’s unclear if he was killed by gunfire from the suspects or the deputies. One suspect was arrested and another is said to have escaped according to authorities.

YG said he was not involved in the chase or shooting, saying that he was in a Hollywood recording studio at the time of the incident.

On July 18, deputies raided a Hollywood Hills home that was being leased by the rapper. One person was arrested and several people more detained. YG was not home at the time and had not been charged in the case.

Reps for YG could not be immediately reached for comment.