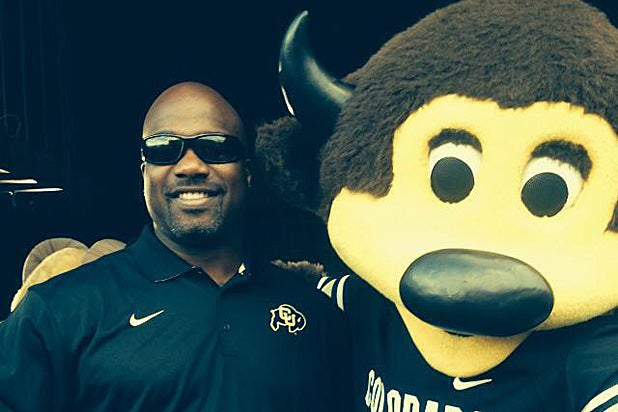 Former Heisman Trophy-wining running back Rashaan Salaam was found dead in a parking lot on Monday night, police in Boulder, Colorado, confirmed. He was 42.

The former University of Colorado and Chicago Bears football star was discovered in Eben G. Fine Park — less than two miles from Folsom Field, where he used to play — at around 9 p.m., spokesperson Shannon Cordingly said, according to ESPN.

There were no signs of foul play and the cause of death will be determined via an autopsy performed by the Boulder County Coroner’s Office. However, Salaam’s mother, Khalada, told USA Today Sports that police found a note and suspect suicide.

“They said they found a note and would share that with us when we get there,” she said.

Members of the University of Colorado community expressed their sympathy on Tuesday over the loss of the beloved alum.

“He had a happy heart,” former coach Bill McCartney said in a statement on the CU athletics website. “I loved being around him. He didn’t take himself too seriously, and he always credited those around him, especially his offensive line. What I liked about him is that he had a sparkle in his eye. He was upbeat and positive.”

Originally from San Diego, California, Salaam played for the Colorado Buffaloes from 1992 to 1994 (when he had one of the best individual seasons in college football history), before being picked in the first round of the 1995 NFL draft by the Chicago Bears.

During his three years in Chicago, Salaam struggled with injuries, fumbles, and marijuana use. He went on to play for the Cleveland Browns, Green Bay Packers, the San Francisco 49ers, and the Canadian Football League, before a suspension in May 2004 ended his career.

I will miss my Heisman brother Rashaan Salaam. He was always smiling and just a lot of fun to be around! #RIP

Beyond saddened to hear the news about my @cubuffs teammate and friend Rashaan Salaam. We lost a true Buffalo today.