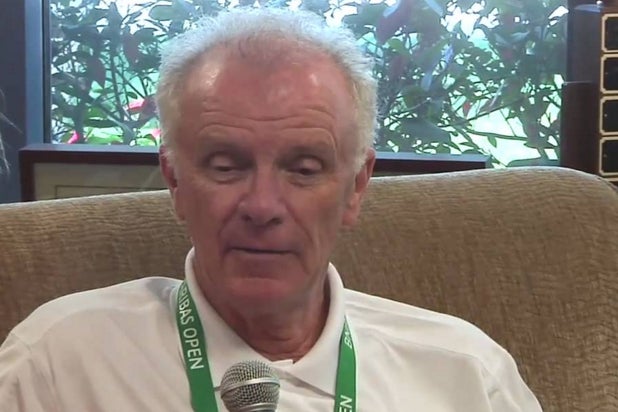 It’s game, set, match for Raymond Moore: the tennis official has stepped down as Indian Wells chief executive officer and tournament director of the BNP Paribas Open after remarks he made about female players.

The resignation announcement came Monday from tournament owner Larry Ellison, one day after Moore (pictured above) accused the women athletes of riding the “coattails” of their male counterparts.

“In my next life, when I come back, I want to be someone in the WTA, because they ride on the coattails of the men,” Moore said on Sunday. “They don’t make any decisions and they are lucky. They are very, very lucky. If I was a lady player, I’d go down every night on my knees and thank God that Roger Federer and Rafa Nadal were born, because they have carried this sport. They really have.”

The comments drew outrage from across the sport and beyond.

“Earlier today I had the opportunity to speak with Raymond Moore,” Ellison began his statement. “Ray let me know that he has decided to step down from his roles as CEO and tournament director effective immediately. I fully understand his decision.”

“Nearly half a century ago, Billie Jean King began her historic campaign for the equal treatment of women in tennis,” the billionaire businessman added. “What followed is an ongoing, multi-generational, progressive movement to treat women and men in sports equally.”

“Thanks to the leadership of Billie Jean, Martina Navratilova, Venus Williams, Serena Williams and so many other great women athletes, an important measure of success has already been achieved,” he continued. “I’m proud to say that it is now a decade long tradition at our tournament at Indian Wells, and all the major tennis tournaments, to pay equal prize money to both the women and the men.”

“I would like to personally thank all the great women athletes who fought so hard for so many years in the pursuit of equal prize money in professional tennis,” Ellison concluded. “And I’d like to congratulate them on their success. All of us here at the BNP Paribas Open promise to continue working with everyone to make tennis a better sport for everybody.”