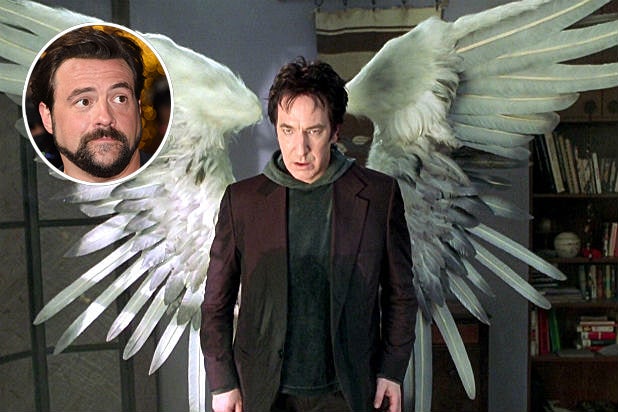 Beloved British actor Alan Rickman was mourned by millions after he died from cancer on Thursday, but one of the most heartfelt tributes came from director Kevin Smith.

Rickman, who lost his battle with cancer at age 69, starred in Smith’s 1999 comedy “Dogma” as Metatron, a.k.a. the Voice of God, garbed in a scruffy grey hoodie and angel wings.

“One of my favorite people who ever lived has died,” Smith wrote in a Facebook tribute. “Alan was the first non-friend who signed up to the flick, but he became a great friend in record time.”

The “Clerks” and “Mallrats” creator posted a photo of Rickman holding up “the Ken doll his Dogma character’s lack of genitalia was modeled after.”

“I’ll never forget his incredible dulcet tones guffawing at the rubber crotch makeup he was wearing: one of the greatest actors who ever lived, tickled by a cinematic lack of a dick,” Smith said.

“I loved Hans Gruber the minute I saw ‪#‎DieHard‬ but I fell in love with the soft-spoken gentle soul who brought Gruber to life. Thank you for lending a hack like me your artistry and your credibility, Alan. You were never Snape to me as much as you were the adult Harry Potter himself: a bonafide wizard who could conjure absolute magic using merely words,” he wrote.

“He was a HUGE cauldron of win, this man. I’ll miss him forever. Rest in Peace, Voice of God. Back to Heaven, where you came from …”

One of my favorite people who ever lived has died. The legendary #AlanRickman played Metatron, the Voice of God, in my…