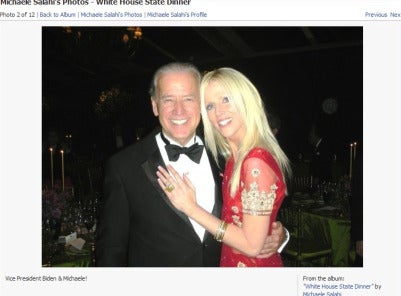 A veritable who’s who of Hollywood royalty descended on Washington on Tuesday night for President Obama’s first state dinner. Geffen was there, Spielberg made an appearance, and "Slumdog Millionaire" composer A.R. Rahman.was on hand to honor India’s Prime Minister Manmohan Singh.

And then there were Tareq and Michaele Salahi.

If you think this is a game of which of these doesn’t belong, you’re absolutely right. The aspiring reality stars who hope to snag roles on a D.C. edition of Bravo’s popular "Real Housewives" series were not invited to hobnob with the First Couple and assorted dignitaries.

"Honored to be at the White House for the state dinner in honor of India with President Obama and our First Lady!" the couple wrote on their Facebook page last night.

The Salahis also posted several shots of themselves mingling with the likes of Katie Couric and Rahm Emanuel in the White House’s East Room and in a tent that had been set up on the South Lawn for the occasion (see pictures of the Salahis with Vice President Biden and Prime Minister Singh). 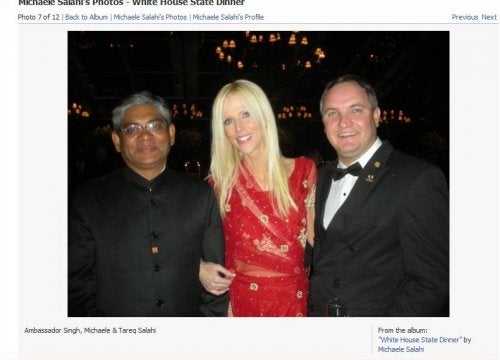 A White House official said the Salahis were not invited to the dinner and were never seated at a table, according to the Post article. Still, it appears that they weres successful in their efforts to breach security.

Aside from coveting reality-show fame and gate-crashing, the Salahis have busied themselves with playing polo and getting into a family fight over their Virginia winery.