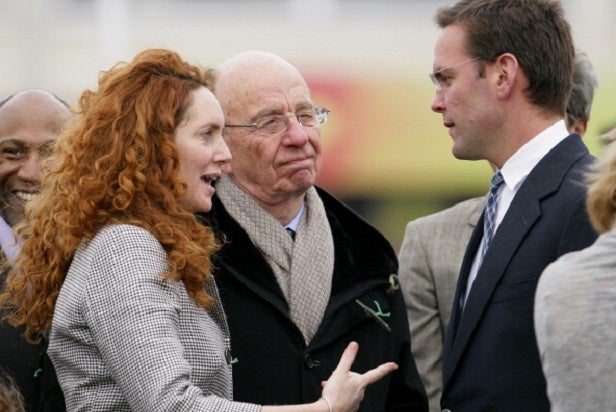 Rebekah Brooks, the former editor and top aide to Rupert Murdoch who was at the center of the U.K. phone hacking scandal, is apparently signing back on with News Corp.

Brooks, who stood trial and was cleared of all charges, will run the company’s Storyful social media news agency, according to London’s Financial Times. She’ll be based in New York, and is also expected to advise Murdoch on potential digital acquisitions.

Brooks (photo above, with Rupert and James Murdoch) resigned as chief executive of News Corp.’s News International, now known as News UK, in 2011. Her exit came in the wake of public outrage over reports that journalists working for the company’s News of the World tabloid had illegally intercepted voice mails left for the missing schoolgirl Milly Dowler, who was later found murdered.

Brooks was charged with several phone-hacking related charges, as were other News International executives including Andy Coulson, the former News of the World editor who went on to run communications for British Prime Minister David Cameron. While she was cleared, Couldson was found guilty and served five months in prison.

Brooks is very well connected. During the trial it was revealed that former U.K. leader Tony Blair offered his support, offering “Let me know if there is anything I can help you with . . . Thinking of you . . . ” She also had “country supper” with Cameron, the court was told.

Murdoch’s backing of her never wavered during the hearing, and he phoned her frequently. While it was considered unlikely she could return to work for him in the U.K., and certainly not as the trial wound down, it was widely speculated that she would eventually be back with her former boss in some capacity.