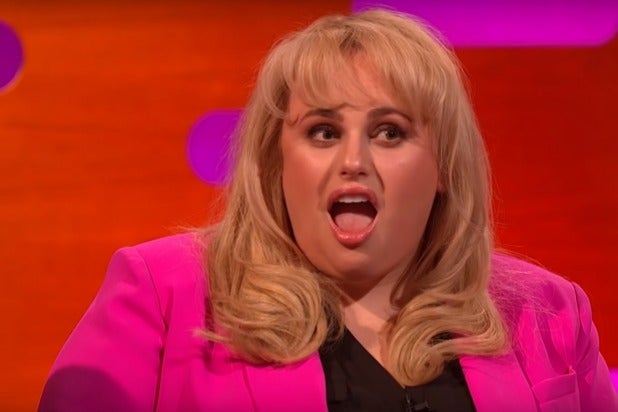 Rebel Wilson and Anne Hathaway tossed aside any urge to be ladylike and went right into potty-mouthed name-calling when asked to ad-lib for their upcoming film “The Hustle.”

While on “The Graham Norton Show” Friday promoting the female-centered remake of the 1988 comedy “Dirty Rotten Scoundrels,” Wilson said that there was a lot of improvising during filming, which she and Hathaway really began to enjoy.

“Annie especially,” Wilson said. “She enjoys when I, like, insult her.”

“It’s true. You’re really good at it,” Hathaway acknowledged. “My favorite is when you called me an animatronic c— tease.”

Wilson nodded, “Yeah. On that day, you really looked like her.”

And Hathaway didn’t pull any verbal punches when it came to swinging back. Watch the video below to see what we’re talking about.

In “The Hustle,” Wilson plays an amateur con artist who is taken under the wing by Hathaway’s elegant pro, sporting a sophisticated British accent no less. Their motto is that men will always underestimate women, and they can use that to their advantage.

“Veep” executive producer Chris Addison is making his directorial debut on the film from a script by Stanley Shapiro & Paul Henning and Dale Launer and Jac Schaeffer. And Tim Blake Nelson also stars in the comedy that’s due out May 10.