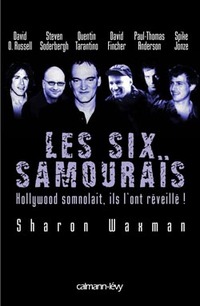 Exciting, for me, anyway. I just received word that "Rebels on the Backlot" has come out in French under the title, "Les Six Samurais," from the publisher Calmann-Levy. This is a first for me. (I never saw the Russian edition, but apparently there was one.) The subhead translates as: "Hollywood was sleeping, they woke it up!" The message might well work for them in this decade: Come on, samurai, rise and shoot!