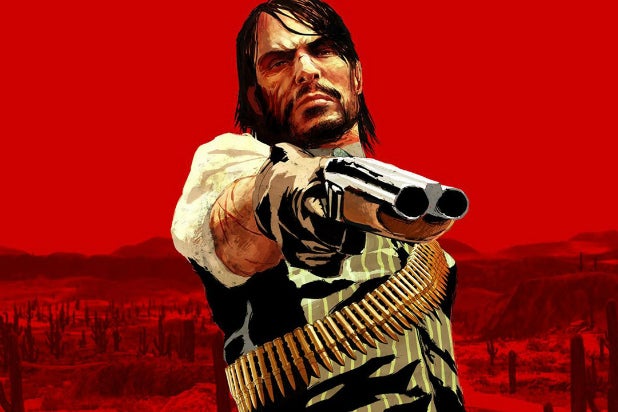 On Sunday morning, video game studio Rockstar tweeted out its logo affixed to a background of red blotchiness. To the lay person, that meant nothing — to “Red Dead Revolver” and “Red Dead Redemption” fans, it was everything.

Immediately, gamers doused the Internet with hopes of a “Red Dead 3” (or “Red Dead Redemption 2,” the ‘net seems divided on the likely title), which appeared to be exactly what Rockstar Games was teasing. This morning, the picture got a whole lot clearer, and those fans grew far more giddy.

At 8:59 a.m. ET on Monday, Rockstar tweeted out an illustration of seven men walking over a hill at dawn. Again, the developer posted no words, but the fans replied with plenty. We’ve got all of it below.

And here’s what originally set the Internet ablaze on Sunday:

Now, let’s turn this post over to the fans. Here are some of the more, um, enthusiastic tweets in response:

And then there are those Twitter users who have some suggestions for the third installment’s name:

Some Twitter users would be cool with this simply being a remaster or update to “Red Dead Redemption,” while others make it sound like that disappointment would ruin their life. Here’s probably the best 140-characters-or-less summation of the second group:

For the uninitiated, she’s abbreviating other “rock stars” My Chemical Romance.

One of my favorite ways to pass the time is to play the latest iteration of "NBA 2K" and take screenshots of moments in which players break through each other -- a concept known as "clipping though." To my great delight, this occurs in "NBA 2K17" just as often as it has in previous entries in the series, and these are the best shots I've taken in its first week of release.