Donald Trump’s lewd 2005 talk with Billy Bush — in which he talked about getting away with groping women because he is “a star” — isn’t going to help his presidential campaign.

Just imagine if anyone had discovered it in the primaries, when Trump easily outmaneuvered ex-Florida Gov. Jeb Bush by calling him “low-energy.” It might have buried the Trump candidacy before Trump won the nomination.

Adding insult to Jeb’s injury: Billy Bush is his cousin.

Rather than sticking up for Billy, Jeb used the scandal as a chance to make a dig at Trump, tweeting after the tape was released: “As the grandfather of two precious girls, I find that no apology can excuse away Donald Trump’s reprehensible comments degrading women,” he wrote in a tweet that Hillary Clinton then retweeted.

Meanwhile, CBS managing editor for politics Will Rahn took to Twitter to imagine an awkward moment at the Bush compound: 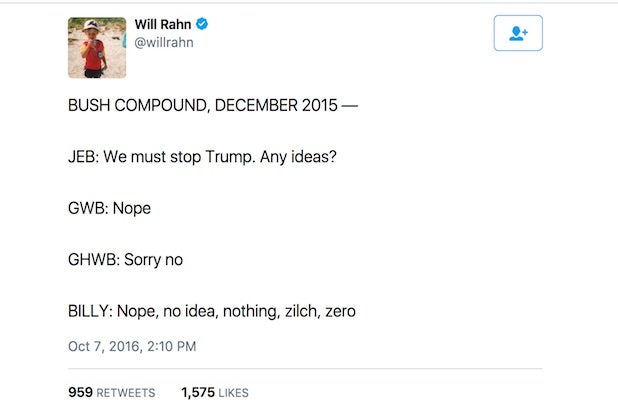 In a conversation released Friday, Trump boasted about groping women, saying that “when you’re a star, they let you do anything.”

“I’m automatically attracted to beautiful women — I just start kissing them, it’s like a magnet,” Trump told Billy Bush, the “Access Hollywood” host Billy Bush in a conversation that was caught on a hot mic.