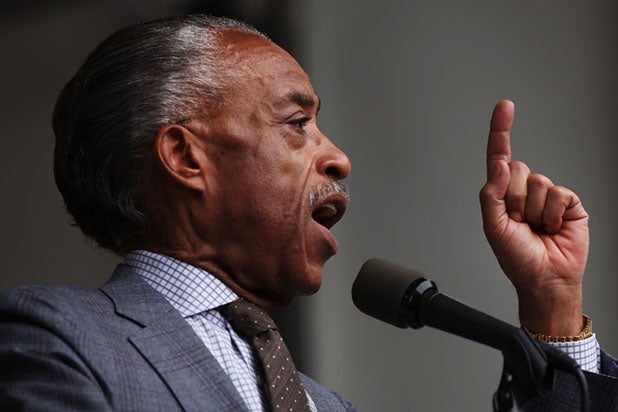 Speaking at Aretha Franklin’s funeral in Detroit on Friday, Sharpton paid respect to the Queen of Soul and her legacy… but didn’t hide his contempt for the president.

“You know the other Sunday on my show, I misspelled ‘respect,’ and a lot of y’all corrected me,” Sharpton said in his speech, referring to how he used the name of Franklin’s biggest hit to criticize Trump’s feud with former White House aide Omarosa Manigault Newman. “Now I want y’all to help me correct President Trump to teach him what it means.”

Sharpton’s dig received a standing ovation. After a moment, he continued, “I say that because when word went out that Ms. Franklin passed, Trump said, ‘She used to work for me.’ No, she used to perform for you. She worked for us.”

Rev. Al Sharpton at Aretha Franklin's funeral: "When word went out that Ms. Franklin passed, Trump said she used to work for me. No, she used to perform for you. She worked for us." https://t.co/qSW5iZgtqR pic.twitter.com/QrvJrR4kw3

After his speech, Sharpton recited a letter from Barack Obama, who was unable to attend the funeral. “Aretha’s work reflected the very best of the American story, and all of its hope and heart, it’s boldness and it’s unmistakable beauty,” the letter read.

Many high-profile figures did attend Franklin’s funeral, including musicians Smokey Robinson and Stevie Wonder, and Hillary and Bill Clinton.

Franklin died earlier this month in Detroit at the age of 76. During her career, Franklin won 18 Grammys, including a lifetime achievement award in 1994, and was also the first woman to be inducted into the Rock and Roll Hall of Fame.