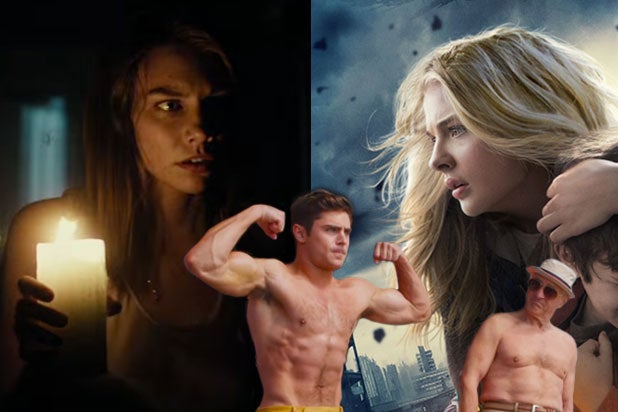 Three should be the charm for Leonardo DiCaprio and “The Revenant,” Fox’s Best Picture Oscar frontrunner, which has been an impressive runner-up at the box office the past two weekends.

The Alejandro G. Iñárritu-directed frontier vengeance saga will take in around $18 million in its third weekend of wide release and top last weekend’s champ, “Ride Along 2,” as well as “Star Wars: The Force Awakens” and three wide openers for this weekend’s crown, analysts say.

Either just above or just below $10 million is where they see Lionsgate’s  Zac Efron-Robert De Niro comedy “Dirty Grandpa,” the low-budget horror film “The Boy” from STX and Lakeshore Entertainment and Sony’s Chloe Grace Moretz young-adult sci-fi tale “The 5th Wave.”

No one is expecting a record weekend, as late January is when studios typically slot films that don’t have natural launch dates, like summer for popcorn movies or fall for awards-bait films. That means the jockeying for position among Oscar contenders like “Spotlight,” “Brooklyn,” “The Big Short” and “Room” could provide the real excitement.

“The Revenant” has out-grossed those Best Picture rivals handily. It came in just a couple of million dollars behind “The Force Awakens” in its wide debut two weeks ago and about the same behind “Ride Along 2” over the four-day Martin Luther King holiday weekend, when it grossed $38 million. Its domestic total will go over $100 million this weekend, and it should top $160 million worldwide as well.

“Ride Along 2” could slow considerably from its MLK-weekend win given its weak reviews and so-so CinemaScore, and “The Force Awakens” has lost some steam, so both could wind up around $15 million. Michael Bay‘s Benghazi attack thriller, “13 Hours,” shouldn’t be far behind those two, so there could be a crowd in the mid-teen millions.

“The 5th Wave” is tracking the strongest of the three wide openers, but not by much. Sony acquired the rights to the trilogy of novels by Rick Yancey with Graham King‘s production company, GK Films, and Tobey Maguire‘s Material Pictures. The young-skewing tale has the best social-media profile of the openers but isn’t breaking any records.

Brit J Blakeson directs from a screenplay by Susannah Grant, Akiva Goldsman and Jeff Pinkner. Nick Robinson, Ron Livingston, Maggie Siff, Alex Roe, Maria Bello, Maika Monroe and Liev Schreiber co-star. The PG-13-rated tale features Moretz as a 16-year-old who thinks she may have found romance amid the chaos of an alien invasion.

It has opened at No. 1 in six smaller foreign markets and taken in $8.5 million, and it was produced for $38 million by Columbia Pictures, in association with LStar Capital. It’s the only one of the three new films to have been reviewed, and it is at a weak 20-percent positive on Rotten Tomatoes.

Demonic dolls have a solid track record of boosting horror films, and “The Boy” has one, so it could equal its $10 million production budget for STX and Lakeshore this weekend.

William Brent Bell (“The Devil Inside”) directs and Lauren Cohan (TV’s “The Walking Dead”) stars as a young American woman who takes a job as a nanny in a remote English village, only to discover that the family’s eight-year-old is a life-sized doll.

If “Dirty Grandpa” reminds you of “Bad Grandpa,” the “Jackass” spinoff that broke out with a $32 million debut two years ago, you’re paying attention.

This one features De Niro tricking his grandson (Efron) into driving him to Florida days before his wedding, but that kind of number is a longshot for the Lionsgate release of the film from QED International and Josephson Entertainment.