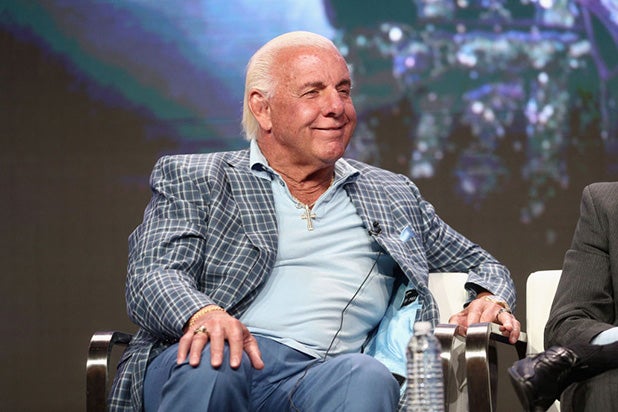 After weeks of wondering what wrestler Ric Flair’s status was following a reported health scare, he finally let his fans know that he’s better than ever.

Flair tweeted out a video Saturday, thanking fans for their support and promising he’ll be in the public eye again very soon. In the clip, he was sporting a shirt that said “I ain’t dead yet mother f***ers” and, in the tweet, he included a link to his merchandise shop.

I'm Backkkk! Thanks To Everyone For The Support These Past Couple Weeks. I Ain't Dead Yet Mother F**ckers! WOOOOO! https://t.co/1ZgKVjFH8x pic.twitter.com/AHSSyE8JT1

This is the second update from Flair, who posted on Aug. 29 that he was bouncing back from a surgery on Aug. 14.

The pro-wrestling legend “Nature Boy” was dealing with “some tough medical issues,” his rep wrote on Twitter.

The reasons for the surgery remain undisclosed but according to USA Today, reports have said the wrestler had “surgery on his bowels to remove an obstruction that had caused his kidneys to shut down.” A TMZ article said he was having multiple organ problems and added that he was put in a medically induced coma.

“Sometimes you have to get knocked down lower than you have ever been, to stand up taller than you ever were,” he wrote.

Sometimes you have to get knocked down lower than you have ever been, to stand up taller than you ever were. Naitch WILL be back! ???? pic.twitter.com/v9YbIEykt9