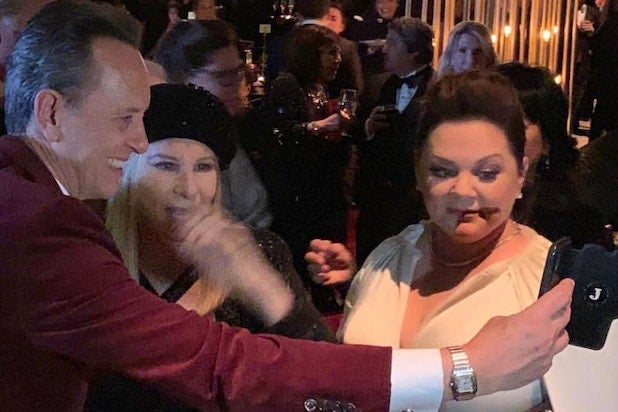 Best Supporting Actor nominee Richard E. Grant may not have won an Oscar on Sunday night, but he still got a valuable prize: He finally met Barbra Streisand.

Since getting nominated for for his work in “Can You Ever Forgive Me?” Grant has been charming the showbiz world with his candid interviews and unabashed excitement over being a nominee. Among the many tales he’s told was how at the age of 14, he sent a fan letter to Streisand; and after getting nominated, he took a selfie outside of Streisand’s house (after asking for permission, of course).

In response to a Twitter post, Streisand thanked Grant for the letter and praised his performance in the film — something that Grant would call a “‘message in a bottle’ miracle.”

Fast forward to Oscar Sunday, and Grant could be seen looking absolutely starstruck as Streisand took to the stage to give a speech honoring the Best Picture nominee “BlacKkKlansman.”

Finally after the show, Streisand and Grant came face-to-face for the selfie of a lifetime.

For those who want to see more of Grant onscreen, you won’t have to wait too long. He is set to appear in “Star Wars: Episode IX,” which hits theaters this December.

My unique Night at the #Oscar2019 between @melissamccarthy & @BarbraStreisand that will forever be my personal ????MEMORIES/THE WAY WE WERE????moment!!!❤️❤️ pic.twitter.com/z1eNcvQWyO