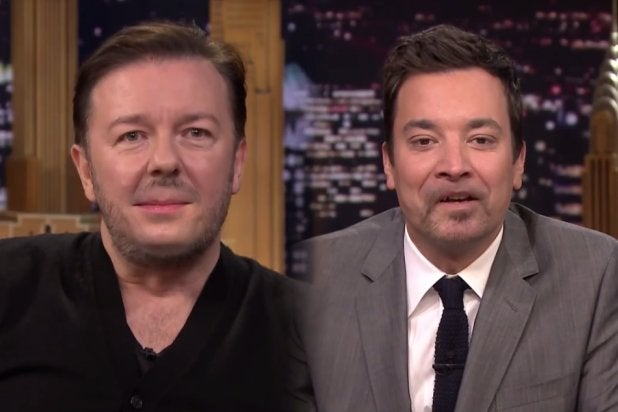 Ricky Gervais is known for his spontaneous laughter, but it was immediately problematic when he proved game for another ridiculous rendition of “Lip Flip” with Jimmy Fallon on “The Tonight Show” Tuesday night.

The “Night at the Museum” star laughed the second he saw his face with Fallon’s lips superimposed over his own, quickly apologizing. He didn’t want to ruin the illusion, such as it was.

Fallon played Gervais like an American redneck trying to hock a timeshare, while Gervais voiced Fallon as a high-pitched simpleton excited about his gig host “The Tonight Show,” where he even gets paid while other people are talking!

Later, the comedian tried to play along, but he couldn’t stop from laughing throughout the bit as Fallon transformed him into a vogue-dancing baby.

Gervais got his revenge, though, by revealing a “truth” as Jimmy Fallon. From there, things took a disturbing turn.

Certainly Gervais proved one of the most active participants of this silly game, as well as perhaps it’s biggest fan.

Ricky Gervais can next be seen in “Night of the Museum: Secret of the Tomb,” in theaters Friday, Dec. 19. “The Tonight Show Starring Jimmy Fallon” airs weeknights at 11:35 p.m. ET on NBC.