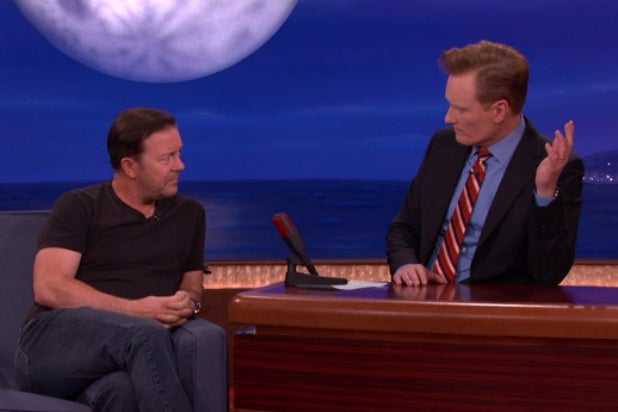 Ricky Gervais saw Louis CK naked while playing a doctor on FX’s “Louie” — and it was not a particularly pleasant sight.

The British comedian and “Muppets Most Wanted” star recalled the scene to Conan O’Brien on Tuesday as “horrendous,” “horrible,” “awful,” “disgusting,” and “hot and clammy,” among other unflattering adjectives.

Gervais went on to describe CK’s fair skin as “like an undercooked chicken,” and the scene’s stench as one of “sweat and shame.”

Eventually, Gervais and Conan got to talking “Muppets,” which the actor was on the TBS late night talk show to plug. The conversation, however, did not become much more sophisticated.

Gervais, who has had a lifelong obsession with the puppets, wants to see them in more films: “You can make any movie better with Muppets,” Gervais said. “‘Schindler’s List’ … that would be amazing, wouldn’t it? ’12 Years a Slave’ … let’s try it at least.”