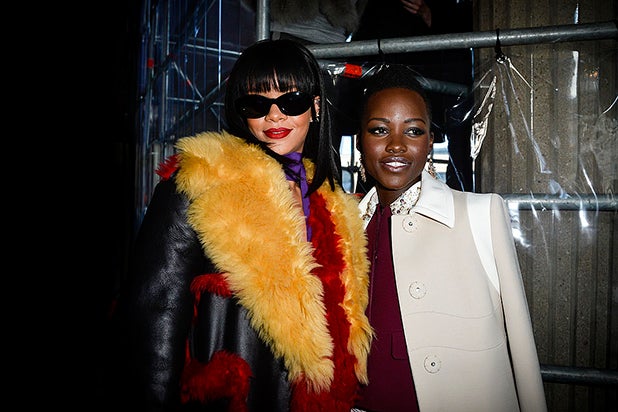 Last week, the Twittersphere created its dream movie, starring Rihanna and Lupita Nyong’o. And after this weekend, it might be close to reality.

The movie pitching session began after a user posted a standout picture of Rihanna and Nyong’o from 2014’s Paris Fashion Week. Nyong’o is dressed down compared to Rihanna, but the two both look like stunning, sophisticated women with a lot of power.

A picture for the history books pic.twitter.com/OgxAGZMn4Z

That’s what got the creative juices flowing. Another user suggested that Rihanna looked like she “scams rich white men” and Nyong’o is the “computer smart best friend.”

Rihanna looks like she scams rich white men and lupita is the computer smart best friend that helps plan the scans https://t.co/PhWs1xd3nj

People weighed in with their ideas, suggesting that it be made into a movie. This then made its way over to the subjects of the photo. First, Nyong’o tweeted at Rihanna, saying she was down.

I'm down if you are @rihanna https://t.co/vwHBWeCbFZ

It took three days but Rihanna responded with her answer, along with a new nickname for Nyong’o.

Also Read: 13 People Azealia Banks Has Had Beefs With, From Rihanna and Lady Gaga to Russell Crowe (Photos)

With both its stars on board, Twitter continued its fan-casting. Issa Rae — creator and star of HBO’s “Insecure” — wasn’t the next person to be suggested, but she was the next one to hop in. As you can tell from the typing cat gif below, there’s some enthusiasm:

So we have Nyong’o and Rihanna starring and Rae writing. But who will direct? There’s only one real candidate.

@rihanna So @ava, your turn pic.twitter.com/YGJbNI5jLz

That’s right, Ava DuVernay — director of the Oscar-nominated film “Selma” and an Oscar nominee herself for the documentary “13th.” Luckily for us, she seems to be in as well.

Why this isn’t being made yet, I’m not sure, but it should. It’s about time, too. Buzzfeed even pointed out that similar stories based on the photo have been making the rounds on social media for years. Nyong’o, in a post on her Instagram, highlighted some fan art of the film, which she says is called “Cashing In.”

Not #FanArtFriday, but had to shout out the amazing #FanArt for our #NeverBeenMade #TwitterInspired movie, CASHING IN, starring me & @badgalriri, directed by @directher and written by @issarae. (Artists largely unknown. Please tag 'em)

So while we all wait for the film to actually get made, we can enjoy this dialogue and picture what the scenes will look like.