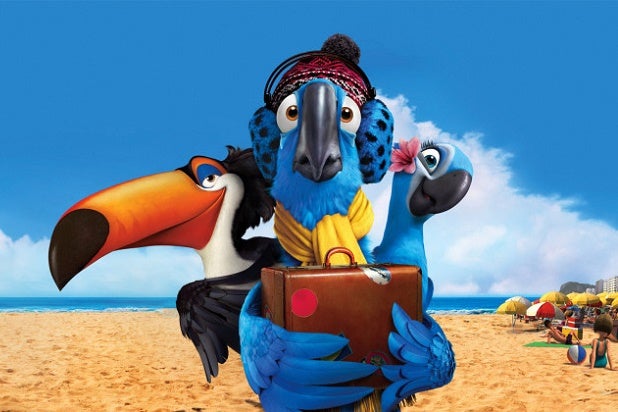 “Noah” dominated the domestic box office, “Captain America: The Winter Soldier” stole the show internationally and “Frozen” became the biggest animated movie in history — but those weren’t the only movies that topped or approached significant benchmarks this weekend.

The Biblical epic debuted to a better-than-expected $44 million in the U.S., while Disney’s Marvel superhero sequel brought in an eye-popping $74 million in its foreign debut. “Frozen,” meanwhile, passed “Toy Story 3” to become the highest-grossing animated movie with $1.072 billion.

With those fireworks, you might not have noticed that several other movies hit or approached major milestones this weekend.:

‘Rio 2’ takes off in Brazil
The animated sequel, which opens in the U.S. on April 11, posted the biggest animated opening ever in Brazil with $7.3 million. That’s the best opening of the year in that market, and Fox’s best ever there as well. “Rio 2” has already made nearly $30 million overseas, and will launch in seven major markets next week, including the U.K., Germany, Spain and Taiwan.

“The Lego Movie” crosses $400 million
The animated juggernaut written and directed by Phil Lord and Chris Miller is that rare movie today that has made more domestically than it has abroad. The blockbuster from Warner Bros., Village Roadshow and Lego has has brought in $248.3 million domestically and $152.2 million internationally. And it still has Australia next week and Germany on April 10.

“The Grand Budapest Hotel” Clicking Overseas
Fox Searchlight’s ensemble comedy is about to become writer-director Wes Anderson‘s highest-grossing movie ever worldwide. In addition to the $8.8 million in its first week of wide release in the U.S., it added $7.5 million from abroad this weekend to up its overall foreign gross to $45.1 million. That makes its global total to date $69.5 million, and puts it behind only his 2001 hit “The Royal Tenenbaums,” which took in $71.4 million. Last’s year “Moonrise Kingdom” tallied $45.5 million domestically and $68.2 million globally.

“Noah” was a record-breaker in Russia
The effects-heavy Biblical epic posted the best opening for an original movie ever in Russia with $17.2 million this weekend, Paramount reported. “Noah,” which is offered in 3D overseas, has taken in $51.1 million since rolling out two weeks ago. It’s getting a big boost from IMAX, which has accounted for nearly $9 million of that foreign haul.

“300: Rise of an Empire” Hits $100 million
Warner Bros. sword-and-sandals sequel crossed the $100 million mark in its fourth week at the domestic box office. But the $101.4 million it’s made in North America is less than half of the $213 million that the 3D and R-rated Warner Bros.-Legendary Pictures battle saga has made overseas. The U.K. has been the biggest foreign market by far, with $52.5 million.