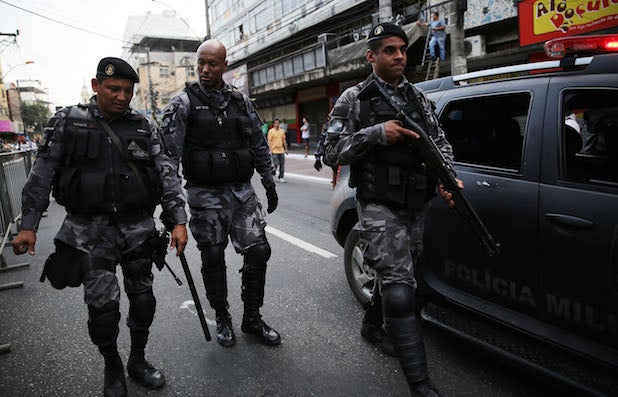 Forget about the polluted water, infrastructure failures and a Zika outbreak that prompted 150 health officials to recommend moving the games, the Rio Olympics has another problem that is giving visitors the jitters — the fear of violence.

Event organizers have kept fuming fans waiting for hours at security checkpoints before they can enter venues, while word spreads of shootings, bombs scares and other crimes around the city.

Security has remained so tight — and so slow to move — that on the first day fans missed entire events and athletes competed without a spectator in sight.

Games spokesman Mario Andrada promised swift action to improve the situation, telling the Huffington Post: “We apologize for everybody standing in line outside the venues. Within the next hours we will be in much better shape.” Uh huh.

Tourists attending the opening ceremony at Maracana stadium found out just how bad violent crime was when they spotted the body of a young man shot dead in the street by police.

The stories persist, like that of a middle-aged Brazilian woman who was killed during a robbery, a murder during an attempted carjacking, stray bullets flying at an equestrian event and the kidnapping of Swedish tourists by a gun-wielding man.

The country must also contend with an outbreak of Zika virus. Three months before the Olympics kick-off leading health experts said the ongoing Zika virus outbreak in Brazil was so dangerous, the games recommended that the games be moved or at least postponed.