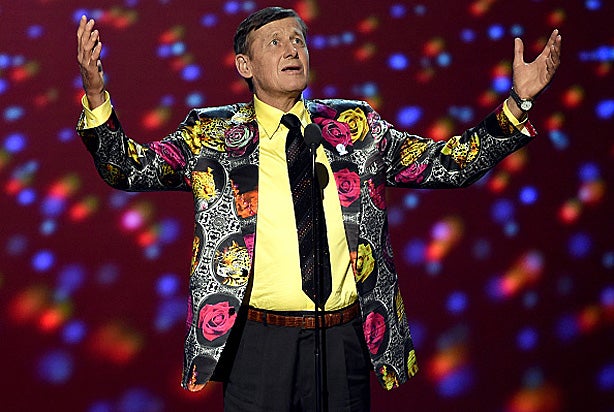 As news spread that Craig Sager had lost his battle with leukemia at age 65, the sports world united to pay tribute to Turner’s beloved NBA reporter.

A colorful presence courtside in his rainbow bright suits and clashing ties for many years, Sager shared his infectious spirit and lust for life with everyone he encountered  — whether in person or through their TV screens.

Even the grumpiest man in sports — San Antonio Spurs coach Greg Popovich — couldn’t help but crack a smile when Sager bugged him with “inane questions” during halftime breaks.

“I gotta honestly tell you that this is the first time I’ve enjoyed doing this ridiculous interview we’re required to do, and it’s because you’re here and you’re back with us. Welcome back, baby,” Popovich told Sager when he returned to the sidelines following cancer treatments last December, Sports Illustrated recalled.

From the biggest names in sports to on-air talent at competing networks ESPN and Fox Sports, an outpouring of heartfelt tributes flooded social media on Thursday.

A lifelong Chicago Cubs fan, Sager finally got to see his team end its 108-year World Series drought in October — and cash in on a bet he’d been placing on them since 1981.

“We send our deepest condolences to the family and friends of Craig Sager. #SagerStrong,” the team tweeted after his death.

NBA commissioner Adam Silver issued a statement about the longtime Turner talent: “I — along with the entire NBA family — am deeply saddened by the passing of Craig Sager,” Silver said.

“Craig was as vital to the NBA as the players and coaches. A true original and an essential voice on Turner Sports’ NBA coverage for 26 seasons, Craig chronicled some of the most memorable moments in league history and was a ubiquitous presence with his splashy suits and equally colorful personality. Craig earned widespread respect for his insightful reporting and inspired so many most recently with his courage,” he continued. “Our hearts go out to his wife, Stacy; his children, Kacy, Craig Jr., Krista, Riley and Ryan; and his friends and colleagues.”

NBA teams will be observing a moment of silence in Sager’s memory.

See some of the many tweets in his memory below.

I will always remember when Craig Sager took me to lunch at his sports bar Jocks & Jills in Atlanta. We had a great time!

The NBA family lost a legend, who changed the way sideline reporters did their job. RIP Craig Sager.

“Time is simply how you live your life.” – Craig Sager. So grateful for the time you shared with all of us. RIP my friend #sagerstrong

We send our deepest condolences to the family and friends of Craig Sager. #SagerStrong pic.twitter.com/0xzctYw2Uz

RIP Craig Sager.. You will be remembered forever..

"Time is simply how you live your life" ????We packed a lifetime and then some into these 28 years together. Pay it forward time! #SagerStrong pic.twitter.com/aEiDb2n0Ki

R.I.P to the most colorful dresser, kindhearted, legendary reporter to ever live #CraigSager ! You will be missed @NBAcom @espn

Sorry to hear about the passing of Craig Sager. You will be missed! #SagerStrong

There was nobody like Craig Sager, and the sidelines will never be the same without him. Rest In Peace, Craig. #sagerstrong pic.twitter.com/0sggNIb8Vk

Craig Sager thanks for saving my life when I was in dire need of help in Detroit back in 1993. Condolences to your family. RIP my friend.

Rest In Peace to Craig Sager. My condolences go out to his family and friends. We lost a great… https://t.co/eOits3OfvV

#RIP Craig Sager. You lived your life full of love and full of fun. That's how you live your life. https://t.co/MF3k8MWZcC

Craig Sager will be missed. A beautiful spirit. His light will to continue to shine.

Craig Sager said in March while he hadn't won his battle with cancer, he had not lost it yet, either. Craig, you didn't lose. You won.

"There will never be another Craig Sager."

More on the legendary life of the one broadcaster everyone loved: https://t.co/Qtc0Eptz29

The Hustle: Craig Sager, 22, working for $95 a week for a radio station, was the closest to Hank Aaron after he hit #715. pic.twitter.com/gy0OwjuBYt

"Craig Sager, a low-volume pro in the loud clothes."

Condolences to the Sager family and our friends at Turner Sports. #SagerStrong pic.twitter.com/GQj1Rk5KSw

I’ll never forget this moment. Game 6 of the NBA Finals when Craig Sager was part of our ABC/ESPN broadcast team. Sitting there next to Craig and watching his reaction when the entire building in Cleveland gave him a standing ovation still gives me chills. What a wonderful example he was for sportscasters everywhere, and most importantly, Craig was a wonderful example of a how to be a truly gracious, kind professional in this dog-eat-dog world. Sending love and prayers to @craigsagerjr and his entire family. ????????