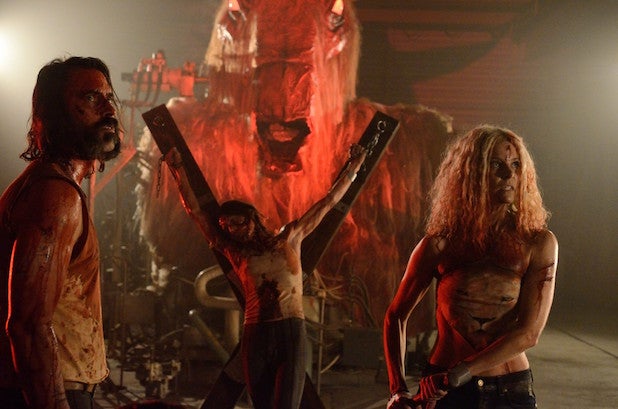 Saban Films is acquiring North American distribution rights to Rob Zombie‘s latest horror-thriller “31,” the company announced Thursday. Written and directed by Zombie, the film premiered at Sundance earlier this year and will be released on Sept. 16.

“​31” follows five carnival workers who are kidnapped and held hostage in an abandoned, Hell-like compound where they are forced to participate in a violent game, the goal of which is to survive twelve hours against a gang of sadistic clowns.

“’31’ is a treat not just to horror fans, but fans of true auteur filmmaking,” Saban Films president Bill Bromiley said. “The film is executed in true stylistic Zombie fashion. Rob is an unrivaled talent, and we are thrilled to bring his bold new film to audiences across the continent.”

“After meeting with Saban, it was obvious that this was the perfect home for ’31,'” Rob Zombie continued. “They have a true understanding of the genre and how to handle it. I am very excited to work with them.”

Saban Films most recently acquired domestic rights to Renny Harlin’s action-comedy “Skiptrace,” starring Jackie Chan and Johnny Knoxville. Additional upcoming titles in the Saban Films slate include Alex and Benjamin Brewer’s “The Trust” starring Nicolas Cage and Elijah Wood; Tom Tykwer‘s “A Hologram for the King” starring two-time Oscar winner Tom Hanks, where Saban is partnering with Lionsgate and Roadside Attractions for the theatrical release on April 22nd; and “I Am Wrath” with John Travolta.

Unfortunately — and ironically — “Friday the 13th” is not available

Essie Davis stars as a single mother who is horrified to discover the monster from her son's nightmares might be real. It's a brilliant psychological character study about a struggling mother on the brink of collapse, but then evolves into a truly fantastical horror parable.