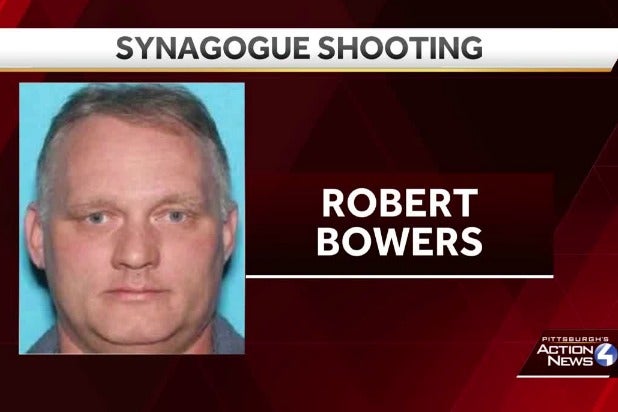 Law enforcement has identified Robert Bowers as the suspect in the Pittsburgh synagogue shooting that killed 11 people and injured several others on Saturday morning.

Here’s what we know about Bowers so far:

• He’s a 46-year-old Pittsburgh resident, according to NBC News.

• Bowers was described as a “white male, heavy set, with a beard,” according to CBS 2 in Pittsburgh.

• An archived, verified account in Bowers’ name on social media site Gab included countless anti-Semitic posts. The Hebrew Immigrant Aid Society “likes to bring invaders in that kill our people,” the account posted on Saturday morning. “I can’t sit by and watch my people get slaughtered. Screw your optics, I’m going in.”

“Gab.com‘s policy on terrorism and violence have always been very clear: we a have zero tolerance policy for it. Gab unequivocally disavows and condemns all acts of terrorism and violence. This has always been our policy. We are saddened and disgusted by the news of violence in Pittsburgh and are keeping the families and friends of all victims in our thoughts and prayers.

We refuse to be defined by the media’s narratives about Gab and our community. Gab’s mission is very simple: to defend free expression and individual liberty online for all people. Social media often brings out the best and the worst of humanity. From live streamed murders on Facebook, to threats of violence by bombing suspect Cesar Sayoc Jr. that went unaddressed by Twitter, and more. Criminals and criminal behavior exist on every social media platform.

Shortly after the attack, Gab was alerted to a user profile of the alleged Tree of Life Synagogue shooter. The account was verified and matched the name of the alleged shooter’s name, which was mentioned on police scanners. This person also had accounts on other social networks.

• The attack is being investigated as a hate crime by the FBI, law enforcement officials said on Saturday afternoon. Bowers entered the Tree of Life Synagogue, located in the Squirrel Hill neighborhood of Pittsburgh, and started shooting at about 9:55 a.m. ET, officials said. The attack lasted about 20 minutes. Charges were expected to be filed “shortly,” according to U.S. Attorney Scott Brady on Saturday afternoon. Bowers yelled “all Jews must die” as he entered the building, police told CBS 2.

• Bowers was in “fair condition with multiple gunshot wounds” after he was taken in by police, said Pittsburgh public safety director Wendell Hissrich.

• Bowers made anti-Semitic remarks after being arrested, police told CNN.

• Bowers was critical of President Trump on social media, according to Heavy, saying, “For the record, I did not vote for him nor have I owned, worn or even touched a maga hat.” two days before the attack, Bowers wrote, according to The New York Times, adding: “Trump is a globalist, not a nationalist. There is no #MAGA as long as there is a” Jewish “infestation.”

Bowers routinely shared anti-Jewish memes on Gab, including doctored pictures of the gates at Auschwitz concentration camp reading “lies make money,” according to The Times.

• Bob Jones, FBI special agent in charge of the investigation, said law enforcement had “no knowledge” of Bowers before Saturday, and believed he acted alone.