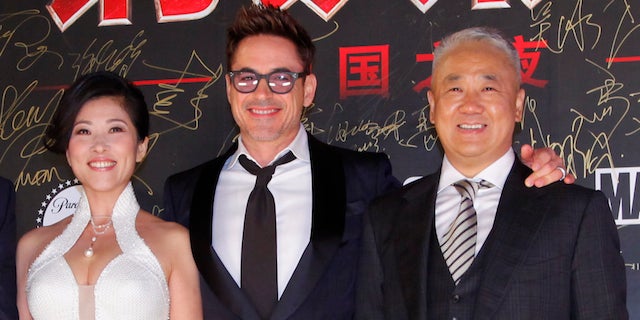 "Iron Man 3," is preparing to blast into Chinese theaters this summer and Marvel sent leading man Robert Downey Jr. to promote the film.

Downey signed autographs for screaming fans after posing with renowned Chinese actor Wang Xueqi, who will appear in both Chinese and domestic versions of the film, as well as China's top actress Fan Bingbing, who only makes an appearance in the Chinese cut of the film.

The plot of the third installment in the billion dollar superhero franchise focuses on Tony Stark squaring off against his toughest enemy yet: the Mandarin (Ben Kingsley). Following a devastating attack on his home, Stark is left to survive by his own devices, relying on his ingenuity and instincts to protect those closest to him. As he fights his way back, Stark discovers the answer to the question that has secretly haunted him: does the man make the suit or does the suit make the man?

Check out five pics from the promotional event below: