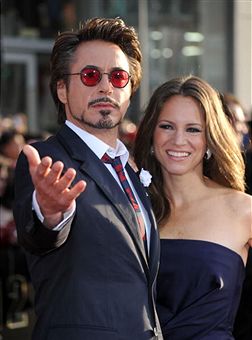 Robert Downey Jr. and wife Susan Downey will produce "Yucatan," a heist film that Steve McQueen originally developed as a star vehicle for himself, reports Deadline.

The film will be the first project under the duo’s new Warner Bros.-based production company, Team Downey, which will produce with Dan Lin. The studio made a new rights deal with McQueen’s son, Chad, who will exec produce with Lance Sloane.

The story takes place in Mexico’s Yucatan peninsula, where a team of thieves try to find ancient buried treasure.

The elder McQueen assembled 1,700 pages of notes and storyboards for the movie that were found in a trunk long after his death. The producers will return to that source material and start developing the project from scratch, though no writer has been hired yet.

The news was tied to Team Downey’s announcement that David Gambino will serve as the company’s president of production. He comes over from Silver Pictures, where he once worked as Susan Downey’s assistant while she was president.

Team Downey has set up shop in Venice and is actively searching for a project that Downey Jr. can direct, indicating that the company plans to do more than just develop star vehicles for the two-time Oscar nominee.