Longtime political columnist Robert Novak, known for his conservative views and for being the first to publish Valerie Plame’s name in the CIA leak case, died at his home in Washington, D.C., Tuesday after a battle with brain cancer. 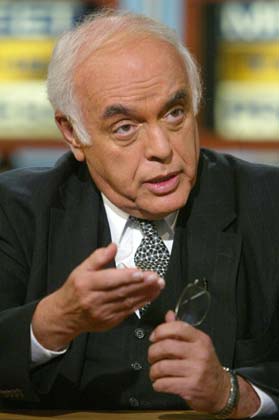 Known as the “prince of darkness” – a label he was so proud of that he used it as the title of his 2007 memoir — Novak, was co-host of CNN’s ”Crossfire” and, with his partner of three decades, Rowland Evans, was author of the syndicated “Inside Report” from 1963 until Evans’ retirement in 1993.
Evans died in 2001.
Novak continued to write the column alone until his cancer diagnosis in July 2008. The diagnosis came less than a week after he was cited for hitting an 86-year-old pedestrian with his Corvette in downtown Washington and drove away. He resumed his writing, mostly in syndicated opinion columns, the following month.
In recent years, he was best known for being the first to publish Plame’s name in 2003. He identified Plame, the wife of former Ambassador Joseph Wilson, as a CIA operative, as retribution for a column Wilson wrote in the New York Times questioning Bush’s justifications for the war in Iraq.
Though outing a CIA agent is illegal, he was never charged — but he came under intense criticism, which he said began ”a long and difficult episode” in his career.
Novak was born in Joliet, Illinois, in 1931, and began writing for the school paper in high school. He served in the Army during the Korean War; after the war he became a writer for the Associated Press in Indiana. Eventually he was transferred to Washington to cover Congress. He left the AP to join the Wall Street Journal, becoming their chief congressional correspondent.
In 1963, he teamed up with Evans to write the Evans-Novak Political Report, syndicated by the Chicago Sun-Times. He and Evans also wrote a popular political newsletter and co-wrote books on Lyndon Johnson, Richard Nixon and Ronald Reagan.
He is survived by his wife of 47 years, Geraldine Novak.
x
Looks like you're enjoying reading