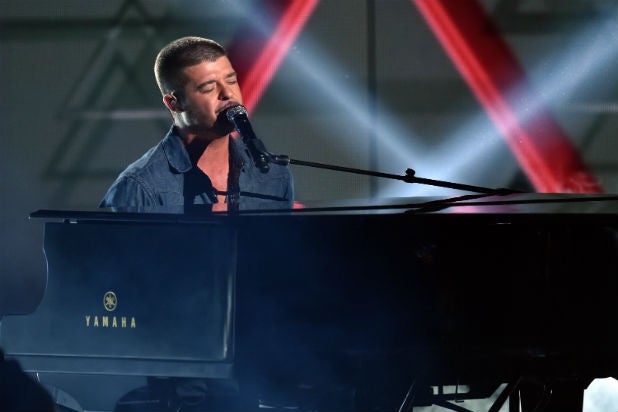 During the second day of the proceedings, superstar musician Robin Thicke took the stand. Dressed in a conservative suit, Thicke appeared confident as he testified in the case that will decide whether the Grammy-nominated song ripped off R&B legend Marvin Gaye’s 1977 hit, “Got to Give It Up.”

Those in attendance, including “Blurred Lines” collaborator Pharrell Williams, got a free show when Thicke played a keyboard while singing a medley consisting of U2’s “With or Without You,” Bob Marley’s “No Woman, No Cry,” Alphaville’s “Forever Young,” Michael Jackson’s “Man in the Mirror” and The Beatles’ “Let It Be,” to demonstrate how easy it is to view any song as similar to another.

Although Thicke said he can’t read music, he revealed he taught himself to play piano by ear when he was 10. But then admitted, “It [sheet music] looks like algebra to me.”

When “Blurred Lines” was played for the court, Thicke swayed along to his own tune while some people in court could be seen grooving, too. Not so for the Gaye family, including children Nona and Frankie and ex-wife Jan, who looked less than enchanted with the display.

When being cross-examined by Gaye family attorney Richard Busch, Thicke tried to distance himself from statements he made in 2013 interviews about Marvin Gaye and “Got To Give It Up” — saying his previous comments were because he was high on Vicodin and vodka every time he talked to the press.

When interviewers would raise a perceived connection between “Blurred Lines” and “Got To Give It Up,” Thicke claimed he just went along with whatever was being said. Thicke went on to say that when he told Oprah Winfrey in an interview after the lawsuit was filed that Gaye and Michael Jackson are his biggest influences, he was not telling the truth then either.

Also Read: Robin Thicke: ‘I Was High on Vicodin and Alcohol’ During ‘Blurred Lines’ Session

Thicke also said he has been referred to in the past as “the white Marvin Gaye,” which he always considered to be an honor and so he embellished stories to the media to capitalize upon the connection. While there was laughter in the courtroom in response, the Gaye family did not appear amused.

The single “Blurred Lines” was a hit worldwide. But Thicke said his record company was not enthralled by the song when it was finished, and his manager suggested six months later that they add a rap by popular hip-hop artist T.I.

Because there are spoken parts in Marvin Gaye’s song “Got To Give It Up,” Busch was intent to demonstrate the rap of “Blurred Lines” as similar to it, which Thicke dismissed.

Busch also played video of Williams’ deposition where he was asked if he thought the bass lines of both songs were similar, to which he answered: “When people say they feel that, I understand. But silk and rayon are two different things.They just feel the same,” adding that there was no intention of making it sound like Gaye, and that you can’t trademark a groove.

Earlier in the case, Thicke said he had gone into the studio and written the track with Williams. But three months later, he added an amendment saying that his recollection had been inaccurate and that, in fact, when he went into the studio, Williams had already created the track and then he’d feed Thicke four lines at a time to go in and loop.

Thicke admitted he was ultimately jealous that the biggest hit of his career had been produced by someone else and later realized he had wrongly convinced himself that he co-wrote the song, thinking of it as a “white lie” that wouldn’t hurt Williams’ career — but that it could boost his own.

Both stars remain adamant that they had no intention of creating a copy of a Marvin Gaye song. “It’s common in studios for someone to say, ‘That reminds me of another song.’ But the goal is to make sure it’s your own song,” explained Thicke.

The trial continues Thursday at 11:20 a.m. in downtown Los Angeles.