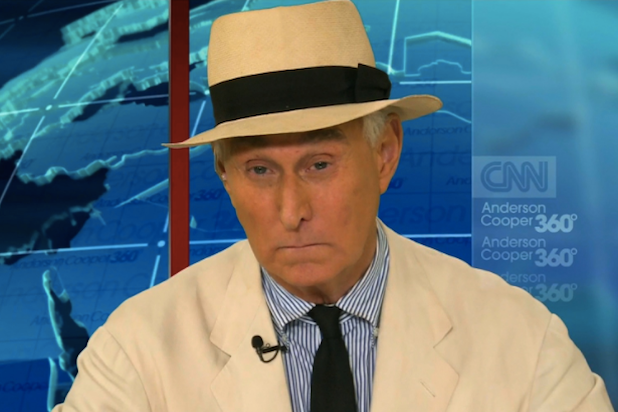 Roger Stone has not been pleased by the growing body of news coverage now reporting that Robert Mueller’s investigators are closing in on him.

“That crazy bitch Abigail Tracy is delusional,” said Stone, while sharing a headline from her warning that his options with Mueller were shrinking. “A year from now I will be exonerated and she will be out of work.”

This crazy bitch @abigailTracy is delusional . A year from now I will be exonerated and she will be out of work

In another post, Stone went after Tracy calling her reporting “fake news bulls–“ and using it as an opportunity to raise money from his follows to help defray his legal expenses.

In a third post, Stone also criticized Tracy using what appears to be a euphemism for “c–.”

“And now in the category of most dishonest yet least knowledgeable reporter in all of media Abigail Tracy,” he wrote over the weekend. “Manafort has nothing to Dish Abigail , truly a C U next Tuesday!”

And now in the category of most dishonest yet least knowledgeable reporter in all of media @abigailTracy beats out @jdawsey1 – Manafort has nothing to Dish Abigail , truly a C U next Tuesday !

Reps for Tracy at Vanity Fair declined to comment. Stone did not immediately respond to request for comment or clarification from TheWrap.

The remarks are par for the course for the longtime GOP strategist who has made a name for often brutal attacks on his opponents. Stone earned a permanent Twitter ban earlier this year after a series of expletive-laden tweets toward Don Lemon and other CNN contributors.

“I have been inundated on Twitter with bloggers threatening to kill me, my wife, my kids and even my dogs, yet Twitter seems unconcerned about that,” he told The Wrap at the time. “This is just part and parcel of the tech left’s effort to silence conservative voices.”

He also threatened to sue Twitter at the time but has so far failed to follow up on that threat.