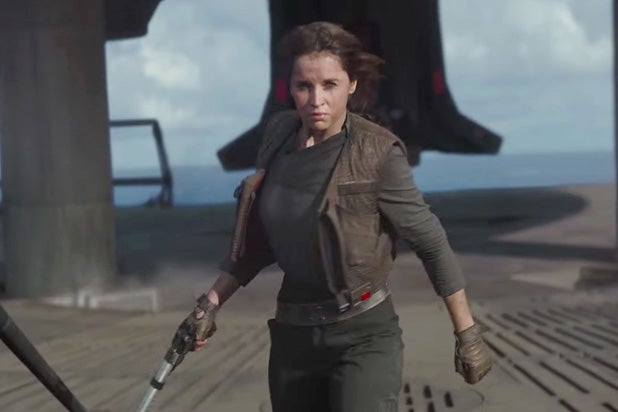 “Rogue One” easily stayed put at No. 1 at the Christmas holiday box office, fending off a whole lot of new competition  by a dominating margin.

The “Star Wars” spinoff starring Felicity Jones, Diego Luna, Donnie Yen, Mads Mikkelsen and Riz Ahmed will end its second weekend with an estimated $127.9 million over the six-day holiday (from Wednesday through Monday).

That puts the grand total for “Rogue One: A Star Wars Story” at an estimated $318.1 million after week two — a galactic feat by any measure.

Family-friendly animated feature “Sing” beat out “Passengers,” “Why Him?” and “Assassin’s Creed” for the No. 2 spot.

Illumination Entertainment and Universal’s “Sing,” with a voice cast led by Matthew McConaughey and Reese Witherspoon, made a whopping $76.7 million over the long six-day holiday weekend to come in under “Rogue One” and higher than expectations. That’s not bad for a film that was produced for roughly $75 million and is playing in 4,022 theaters.

“Passengers” with Jennifer Lawrence and Chris Pratt, will come in at No. 3 with an estimated $30.4 million. That’s less than initial estimates from some trackers that had its six-day opening as high as $50 million, though Sony’s early estimates were always in the $30 million to $40 million range.

The Michael Fassbender-starring action fantasy flick “Assassin’s Creed” debuted at much lower than expected, with grosses around $22.5 million from 2,970 theaters for fourth place. Initial estimates had it at roughly $37 million over the six days.

Having entered 2,917 theaters on Friday, Fox comedy “Why Him?” reached an estimated $16.7 million during its four-day opening. The film, which has a 40 percent on Rotten Tomatoes and a B+ CinemaScore, is about a father who becomes deeply competitive with his daughter’s wealthy boyfriend and stars James Franco, Bryan Cranston and Zoey Deutch.

“Sing” revolves around a theater-owning koala named Buster Moon (McConaughey) and also features the voices of Seth MacFarlane, Scarlett Johansson, John C. Reilly, Taron Egerton, Nick Kroll and Nick Offerman. It should hold solid numbers, as it continues to play into January and critics warmed up to it. It has a 72 percent on Rotten Tomatoes, and its A CinemaScore (given by those surveyed on opening night) is also a sign of the animated feature’s durability.

One count against the Fassbender title: video game-based movies have a bad track record — plus critics aren’t loving it, as reflected in its current Rotten Tomatoes score of just 20 percent. It has a B+ CinemaScore.

“Passengers” was directed by Morten Tyldum and revolves around two spacecraft passengers who are awoken 90 years too early as they travel to a distant planet. It was made for $110 million, not counting tax incentives and marketing, and is playing in 3,478 locations. Critics aren’t loving it either, as it has an early Rotten Tomatoes score of 32 percent. CinemaScore graders gave it a B.