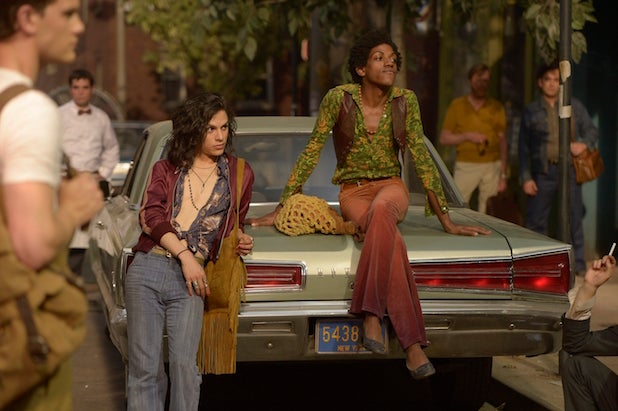 Written by Jon Robin Baitz, the story chronicles the 1969 Stonewall riots that started America’s LGBT rights movement. Irvine plays Danny Winters, a fictional young man who’s forced to leave behind friends and loved ones when he is kicked out of his parent’s home and flees to New York. Alone in Greenwich Village, homeless and destitute, he befriends a group of street kids who soon introduce him to the local watering hole The Stonewall Inn; however, this shady, mafia-run club is far from a safe-haven.

As Danny and his friends experience discrimination, endure atrocities and are repeatedly harassed by the police, we see a rage begin to build. This emotion runs through Danny and the entire community of young gays, lesbians and drag queens who populate the Stonewall Inn and erupts in a storm of anger. With the toss of a single brick, a riot ensues and a crusade for equality is born.

“I was always interested and passionate about telling this important story, but I feel it has never been more timely than right now,” said Emmerich, who took a break from directing big-budget blockbusters to direct and produce this important film.

Less than 50 years ago, in 1969, being gay was considered a mental illness; gay people could not be employed by the government; it was illegal for gay people to congregate, and police brutality against gays went unchecked. Today, thanks to the events set in motion by the Stonewall riots, the gay rights movement continues to make incredible strides towards equality. In the past several weeks alone, the Boy Scouts of America has moved to lift its ban on gay leaders, the Pentagon will allow transgender people to serve openly in the military, and SCOTUS has declared that same-sex marriage is legal nationwide in all 50 states.

“It was the first time gay people said ‘Enough!'” explains Emmerich. “They didn’t do it with leaflets or meetings, they took beer bottles and threw them at cops. Many pivotal political moments have been born by violence. If you look at the civil rights movement, at Selma and other events of that kind, it’s always the same thing. Stonewall was the first time gay people stood up and they did it in their own way.  Something that really affected me when I read about Stonewall was that when the riot police showed up in their long line, these kids formed their own long line and sang a raunchy song. That, for me, was a gay riot, a gay rebellion. What struck me was that there was a story in there, which I felt had an important message – it’s the people who had the least to lose who did the fighting, not the politically active people. It was the kids that went to this club that consisted of hustlers and Scare Queens, and all kinds of people that you think would never resist the police, and they did it.” And the events they set in motion would have a profound impact on the future.

In addition to Emmerich, “Stonewall” was produced by Michael Fossat, Marc Frydman and Carsten Lorenz, and executive produced by Kirstin Winkler, Adam Press and Michael Roban.